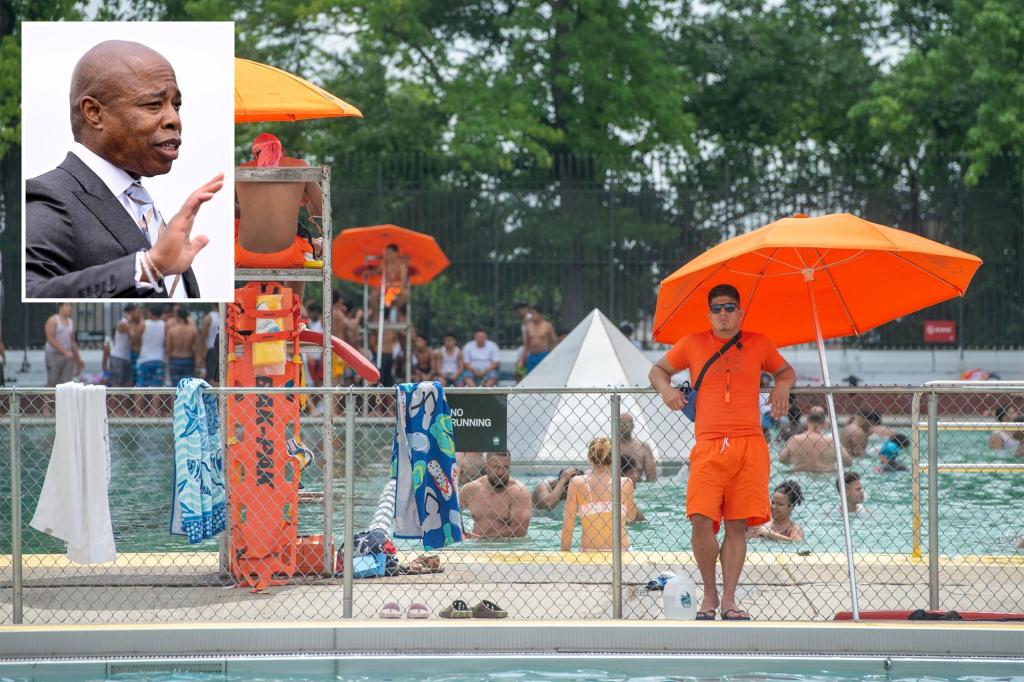 Hizzoner’s remarks came after The City, a nonprofit investigative news organization, revealed that officials from the city’s Department of Administrative Services were rejecting waiver requests from paramedics and other first-timers. responders to work as lifeguards, despite having signed the documents in previous summers.

He also highlighted other shortcomings in the lifeguards division, including a testing regime that conceals key information from applicants and allegations that union bosses retaliate against critics.

Adams also continued to blame what he described as a “shortage of national lifeguards.”

“I would love to go to the Jersey Shore and rob their lifeguards, but they have a shortage,” he explained. “We are looking at how to fill this shortage.”

DCAS argued that it was simply enforcing a three-decade-old rule that it prohibits city employees from doing double work in order to reduce overtime.

The Parks Department has trained and hired just 529 of the 1,500 lifeguards it needs to staff the city’s beaches and pools for the summer, officials said Tuesday.

Last week’s article in The City highlighting the DCAS about-face is the latest in a long line of news reporters and watchdog journals who have identified deep and long-standing problems in the lifeguard program of the Parks Department.

These investigations traced much of the dysfunction back to the powerful head of the lifeguards union, Peter Stein, who was effectively allowed to run the program as a personal fiefdom by successive city hall administrations since Mayor Rudy Giuliani.

For years, Stein served as both the city’s chief lifeguard who oversaw the program and head of the union that represented lifeguard supervisors, an arrangement that good government groups at the time described as a conflict of interest. .

The Post revealed in 1989 that Stein coerced subordinates into contributing to a mysterious political committee, but he walked away unscathed.

Then-public counsel Mark Green issued a scathing report in 1994 that the program operated in an “ocean of mismanagement, secrecy, favoritism and even deceit” that contributed to several drownings because lifeguards were not properly trained or supervised. Green’s report found that in one case, a child drowned while lifeguards were playing football nearby.

Stein was eventually forced to relinquish his official position as director of the Parks Department’s lifeguard program, but he remained union boss and was replaced by his right-hand man, Richard Sher.

Sources told New York Magazine that this meant nothing changed and that Stein remained under the effective control of rescuers.

The Post revealed in the early 2000s that Stein was one of the highest-paid employees in the city’s entire workforce thanks to an arrangement that allowed him to concurrently work as an instructor at Brooklyn’s public high school, in addition to his union responsibilities.

In 2009, The Post revealed that the culture of brotherhood in the lifeguard program still lives on by posting photos of crates of beers hidden outside the Orchard Beach lifeguard station amid a spate of drownings.

Officials at the time defended alcoholism, saying beers were drunk after hours when the beaches were closed.

The lifeguard program exploded again in 2020 when NYMag published a story that revealed Stein ran the program like a favoritism machine, relying on “a playbook of favoritism, power-brokering, and intimidation.”

This story sparked a review of the program by the Investigations Department, which stalled for months and whose existence was later leaked to the publication.

The resulting DOI report was released in December 2021, and Sher and Stein declined to be interviewed by investigators.

“When the DOI spoke with Stein to set up an interview, which he ultimately declined to schedule, he made a telling remark during the brief conversation: He wanted to know why lifeguard coverage doesn’t focus on protecting them. people against drowning on city beaches. and swimming pools,” concludes the damning 18-page report. “This report provides an answer – the history of the structure and culture of the lifeguard division reveals a systemic dysfunction in its management and accountability.”

Sher retired from the Parks Department the same year.

Stein remains the leader of Local 508. He did not immediately respond to requests for comment.