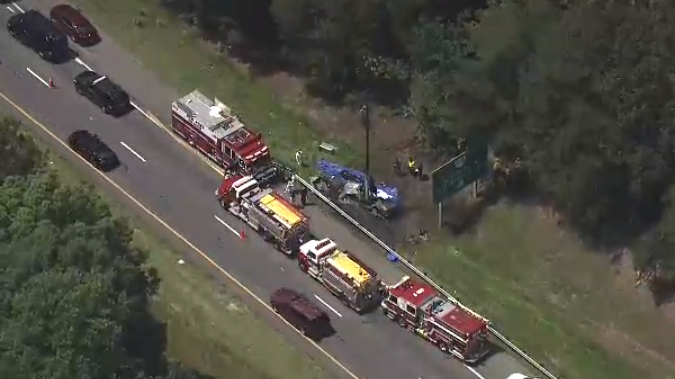 Adult, three children killed in fiery crash on I-64 in New Kent

The accident occurred at Exit 214 of Providence Forge opposite Colonial Downs. The left westbound lane of I-64 in New Kent reopened after the crash closed all lanes earlier, according to the Virginia Department of Transportation (VDOT).

The VDOT says a backup that had a line of traffic spanning eight and a half miles at one point due to the crash is missing. Traffic had been diverted at Exit 220, Eltham Road in New Kent County, and Exit 227, Old Stage Road in Toana. Drivers have been advised to expect delays and to plan an alternate route.

State Police said a sedan was passing traffic on the right shoulder as it pulled off the road on the grassy shoulder and struck a pole housing a VDOT traffic camera, catching fire. The front passenger was cut from the vehicle and taken to a local hospital with life-threatening injuries. The driver and three miners died instantly.

The identity of the deceased is withheld until positive identification can be established and the next of kin can be informed. The police investigation into the incident is underway.

State Police Sgt. Dylan Davenport could not provide specific details at the start of this investigation, but said they will try to find out how this car got off the road in the first place.