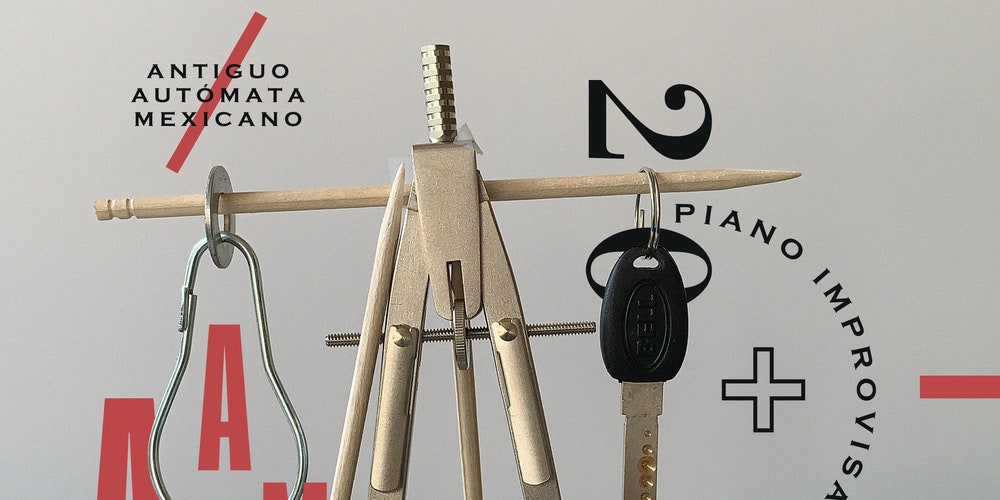 The pianola – better known as the mechanical piano, an instrument that appears to play on its own, as if a ghost is sitting on the keyboard – has been obsolete for a century, but its DNA survives in the form of the piano roll. Originally, the piano roll was a paper roll perforated with tiny holes that dictated the pitch, tempo, and dynamics to be reproduced by a mechanical piano. Today, piano roll is a common term for the graphical interface used to program MIDI notes on a computer screen. These two technologies, one archaic and the other contemporary, collapse on More than 20 piano improvisations, a collection of cryptic studies that vacillate in the margin between the played and the programmed.

Monterrey-based musician Ãngel SÃ¡nchez Borges, aka Antiguo AutÃ³mata Mexicano, has been active in the Mexican experimental music scene since 1985. On previous releases like 2005 Microhaine and 2007 Kraut Bitch, Borges explored the springy rhythms and brushed metal textures of millennial glitch techno. With More than 20 piano improvisations, he abandons the exterior traps of electronic music, turning his attention to the piano and, in doing so, emphasizing the automaton in his pseudonym. Dating back thousands of years, automatons are machines programmed to perform basic tasks or perform certain movements, often in ways that seem deceptively realistic. The mechanical piano was an automaton common to many bourgeois salons at the beginning of the 20th century; an early (albeit expensive) model of music player that introduced virtuoso performance techniques to the mass market.

An album of electronic orders masquerading as acoustic music and vice versa, More than 20 piano improvisations is part of a tradition that spans from Conlon Nancarrow’s piano studies to Aphex Twin’s Disklavier experiments. But in Borges’ mix of practical performance and MIDI programming, there is little evidence of the ghost in the machine. Unlike Nancarrow’s dreadfully difficult pieces, with their crazy train rhythms and impenetrable note pads – antecedents of the punitive black MIDI stunts – Borges’ two and three minute preludes are thin, almost melancholy things. Provisional right-hand melodies tease their left-hand counterparts, pushing repeated figures both forward and outward, like rainwater finding its way. The rhythm is a kind of mechanical rubato, as if a robot was palpating its limbs. The atmosphere is hesitant, calm, curious – without fear of being sentimental, but never tearful. Sometimes it’s even playful, albeit in a hushed and hanging manner.

Borges never goes out of his way to hide the unreality of his plays; the very first song sounds like something that could be plausibly performed by 10 fingers in real time, but it is dragged by a low, inconspicuous synth shadow, almost as if the computer is buzzing, like Keith Jarrett lost in his reverie. In the closing piece, a long reverb tail goes out of tune as it curls up, giving the piano an eerie, waterlogged air.

The album’s opening tracks tend to unfold in a naturalistic fashion, as cautiously graceful counterpoints trace the melodic and harmonic terrain with the precision of county surveyors. Even at its simplest, his instrument sounds exceptionally rich and embodied, with the brewing of felted hammers lending a percussive feel to its denser passages. A piece can start simple, but gradually build up additional vocals – in “Piano Improvisation No. 5” faint echoes, almost like traces of dub delay, creep into the frame; in “Piano Improvisation No. 14”, the left and right hand parts seem to branch out into several counterpoints as the music speeds up and slows down. Often in the end, the melodic line of a given song has been blurred with parasitic alterations and extra layers, like an Etch A Sketch that hasn’t been completely erased. And sometimes Borges completely abandons the vanity of the solo piano; with its dissonant string synth layers, â€œPiano Improvisation No. 16â€ sounds like his response to Paul Hindemith’s piano and violin sonatas.

But the pleasure of this wonderfully moving album does not lie in the search for the wizard behind the curtain. How the music was created is ultimately irrelevant; what matters is the depth of feeling it reaches. Borges’ preoccupations are musical and not technological: channeling modernism bristling with “Vexations” by Erik Satie and “In a Landscape” by John Cage alongside the hot-blooded neo-romanticism of Harold Budd La Bella Vista and Perhaps, Borges presents 20 sweet musical puzzles that feel nostalgic, curious and whimsical all at the same time, like well-worn bar puzzles, pleasant to the touch.

Catch up with every Saturday with 10 of our top rated albums of the week. Subscribe to the 10 to Hear newsletter here.