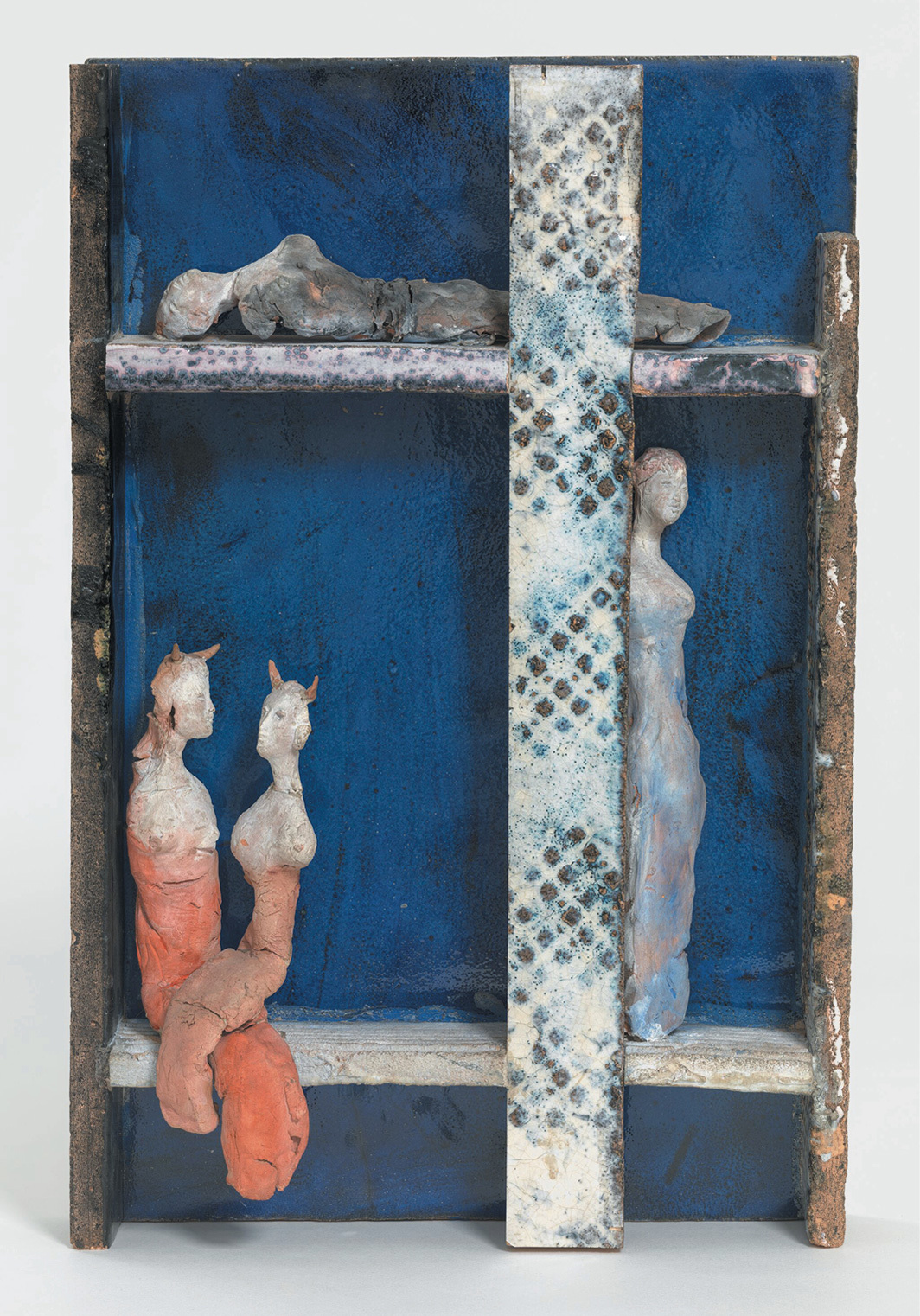 “Fausto Melotti: Theatre” traces the prolific Italian artist’s marked affinity for the stage in works ranging from pencil and ink drawings of Orpheus dating from the 1920s and 1930s to delicate quasi-scenographic sculptures in brass, wood and fabric made from the 70s until 1986, the year of his death at the age of eighty-five. Although hints of allegory and allusions to storytelling are part of the dramaturgical dimension of Melotti’s work, the performance suggests that he approached theater as material rather than narrative form. In From Shakespeare (After Shakespeare), 1977, for example, a geometric brass structure supporting sinuous figures cast shadows on draped fabric. The soft interplay between the fine metallic lines and the blue-tinted textile animates the work, as if Melotti had conceived an event rather than an object.

by Melotti”Teatrini» (Small Theatres),1930–85, also used a subtle material contrast between the sheen of glazed ceramics and the textured surface of painted clay and terracotta. A selection of seven of these open, box-like assemblages made between 1949 and 1984 – Melotti’s most explicit take on the idea of ​​a stage and curator Saim Demircan’s starting point for the exhibition – highlighted highlights the use of ceramics by the artist. Part of a generation of post-war Italian artists drawn to the medium’s ties to classical Etruscan and Roman culture, Melotti was unique in probing its connection to theatre, which also shared these ancient origins. In Teatrino, California. 1950, four nimble female forms pose within a shallow rectangular ceramic frame. All without arms, two are horned and intertwined, like chimeras; another is prostrate on a raised shelf, and the fourth is standing. Reminiscent of fragments of ancient statues, these shapes bear the cracks and compressions of roughly manipulated clay. In the later Incendio bianco (White Blaze), 1961, two infant bodies melt into each other next to crumpled white paper that emerges like a flame from a pumice stone. Although the scene can be heartbreaking, a nod to the ceramic firing process redefines the work as a playful self-reference. The artist worked almost exclusively in ceramics in the fifteen years following the Second World War, producing a range of homewares and decorative objects, although the “Teatriniwere the only terracotta works he considered part of his artistic practice. The exhibition asks what made these miniature terracotta theaters the only viable mode of artistic creation for the Milanese artist in the wake of global trauma.

The scenography of the exhibition, by the London artist and ceramist Aaron Angell, accentuates this material research, situating the “Teatriniin an oval alcove and elevating the seven free-standing sculptures to eye level on large white plaster plinths embellished with textured marking typical of medieval European sandstone. The interplay between the sculptures and this setting echoes the lyrical contrasts that activate Melotti’s work, while emphasizing the materials he found appropriate for this enduring motif. Careful attention to presentation distinguishes the show’s concise take on his career, reflecting the performer’s own sensitivity to the intricacies of staging his theatrical visions.

A date and three happy-ever-afters