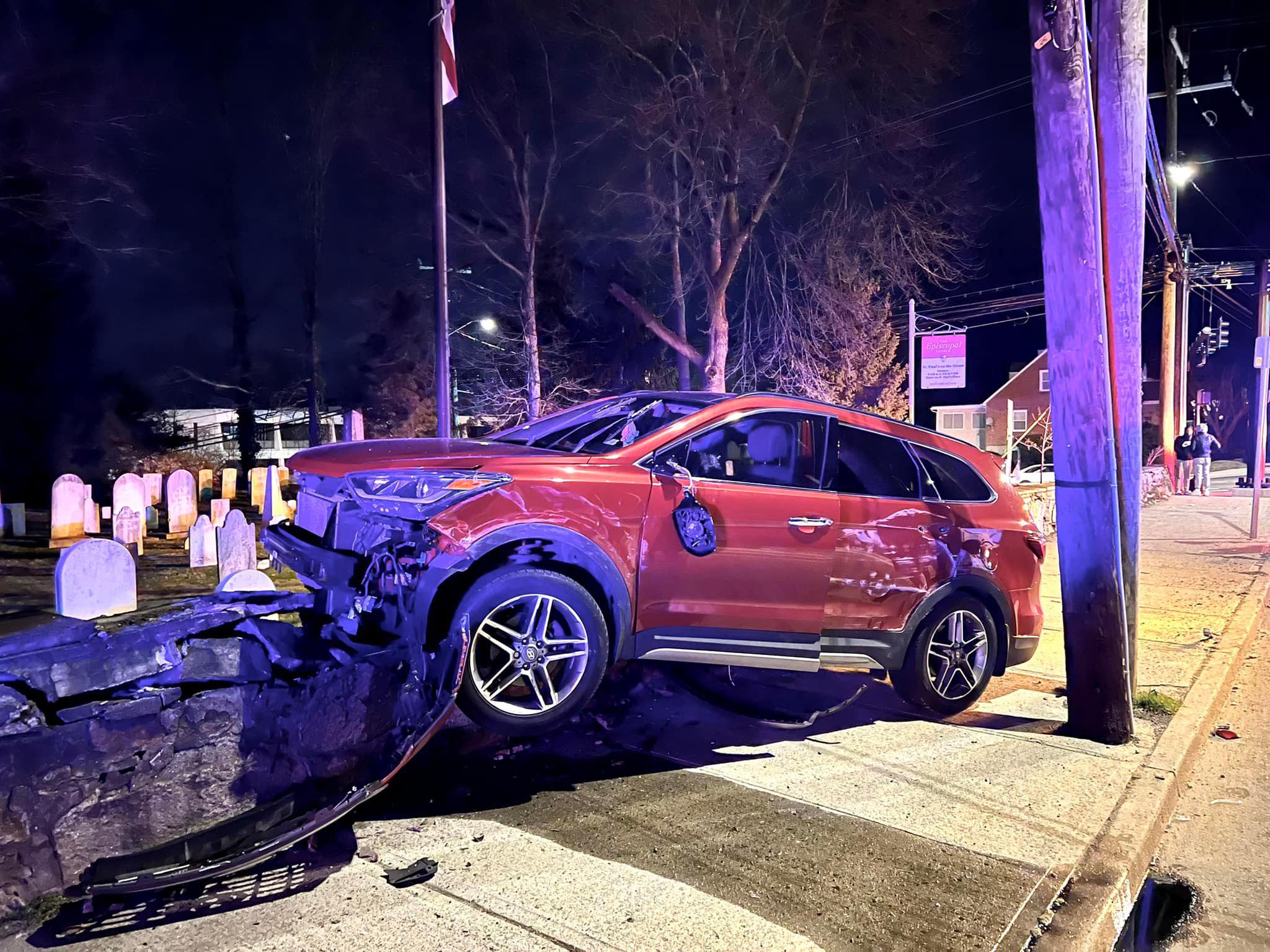 NORWALK—A car crash on Norwalk Green on Saturday night damaged a stone wall dating back to the 1700s that surrounds a cemetery from the same era.

Norwalk Police could provide few details as the investigation is ongoing and a report on the incident has not yet been written, said Sgt. Sofia Gulino said.

“At approximately 10:08 p.m. on April 2, 2022, Norwalk Combined Dispatch received multiple calls regarding a vehicle hitting the wall and then leaving the scene,” Gulino said. “Once the investigation and report is complete, I will be able to provide more details.”

Saturday’s Norwalk Police incident log shows an officer sent to East Avenue around 10 p.m. for a car accident with no injuries.

As the vehicle left the scene, it was spotted by several Norwalk residents and photographed by Norwalk historian David Westmoreland and her husband Mike Mushak.

Westmoreland and Mushak fell to the scene outside St. Paul’s on the Green Episcopal Church around 10:30 p.m.

The car was positioned on top of the rock face and did not break through the cemetery but destroyed part of the wall. The vehicle was also within inches of a utility pole, Westmoreland said.

Westmoreland and Mushak were driving home from a musical when they noticed the traffic and lights surrounding their parish, as well as the accident on the green.

“The performance ended at 10:30 a.m. and we were driving home and driving down the hill on Westport Avenue and saw flashing red and blue lights,” Westmoreland said. “Mike said, ‘That doesn’t look good.’ I said I bet someone hit the wall.We rounded the corner and there was a car sitting on a pile of rocks that they had hit.

Saturday night was not the first time the historic cemetery had been involved in a car accident, Westmoreland said. More recently, the cemetery wall was struck about nine years ago in a similar situation.

“It’s quite a steep hill and they (drivers) are hitting the fire. I think people want to make that light and they accelerate and turn left and lose control, and don’t make the turn,” Westmoreland said. “People who have accidents, they go too fast.”

The church has insurance that will likely cover the cost of repairs to the cemetery wall, which Westmoreland says will cost less than $10,000. The reconstruction of the wall, however, will take some time as several examinations and damage assessments must be carried out.

Additionally, there were footstones bearing the initials of those buried in the cemetery now buried under the rubble of the fallen wall, Westmoreland said.

The parish will not know of the potential damage to the footstones until the drop wall is cleared. St. Paul’s on the Green did not respond to a request for comment on the accident.

St. Paul’s as a parish was founded in 1737, with the first burial at the cemetery taking place in 1739, Westmoreland said.

The cemetery wall surrounding the graveyard dates from the late 18th century or around 1800.

“There are about 400 surviving tombstones in Saint Paul and in the crypts and probably a thousand people are buried there. We still have an active cremation cemetery as well,” Westmoreland said. “He’s been hit multiple times over the years. I know there was an Hour article that I found. Sometime in the 1920s he describes an accident where they went through the wall and into the graveyard and hit five or six stones of one family.

Evidence of the crash 100 years ago is still visible in the cemetery, as all the family stones are attached to a single concrete base when repaired, Westmoreland said.

The area became less accident-prone when roads were restructured to line up properly, Westmoreland said.

“The roads did not line up. The intersection was more dangerous and went by the nickname “dead man’s curve” according to The Hour article, he said.