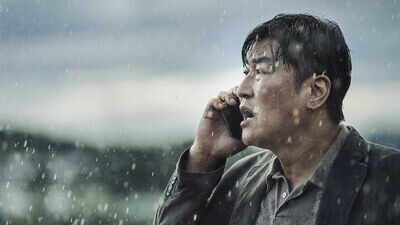 Crew members and passengers of the flight fight panic as they plan a course of action with calm and noble officials, especially Transport Minister Sook-hee (Jeon), but also In-ho and his police colleagues. These main protagonists don’t really have personalities beyond what the scene demands of them, whether planning an emergency landing in Seongmu or swapping one in-flight meal for another. Hee-jin, Jae-hyuk, and Sook-hee all inevitably assert themselves, but their heroic actions are often just as funny and amazing as Jin-seok’s cartoonish villainy.

At one point, Lee’s character gives a flowery, drawn-out speech that explains why he, acting on behalf of his fellow travelers, selflessly chose to take evasive action. Jae-hyuk’s explanations sound as bombastic and self-righteous as the worst Oscar acceptance speech, especially when he explains that “because we’re human…there are things only we can do.” Now we intend to make a decision for the good of all. A few canned reaction shots suggest Jae-hyuk’s other passengers have already resigned themselves to their fate since they too are passively listening to Lee.

In another key scene, K1501 passengers use their Wi-Fi-enabled phones to reassure loved ones and solve unfinished business. These sketchy, pseudo-banal exchanges are not only emotionally stillborn, but also visually stifling as they are presented as a series of picture-in-picture video chat calls. We look up at tear-stained, distorted faces and listen to cutesy conversations about Grandma’s cooking – “I’m sorry I said your food tasted bad” – and saving for rainy days: “Behind there I hid money. Buy candy.

After a few overheated exchanges, the camera’s field of view disappears once the people onscreen are reduced to a smaller frame within the frame. Then the next scene begins, as this plane must return to earth somehow, on behalf of humanity and by any means necessary.