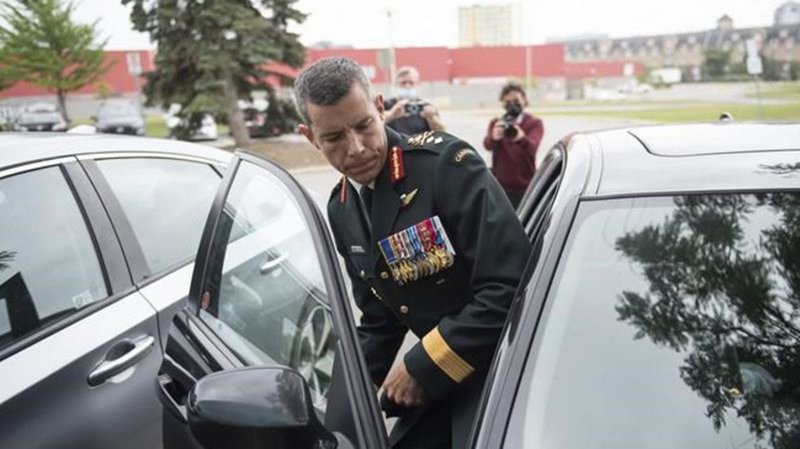 Fortin reinstatement decision, COVID concern in schools: In the news of October 12, 2021

They say it violated Fortin’s due process rights and the presumption of innocence, and represented inappropriate political interference in the internal affairs of the military.

But government lawyers say the decision ultimately rested with acting defense chief Gen. Wayne Eyre, who acted correctly and was concerned about the vaccination campaign and a military police investigation into the conduct of Fort.

Fortin was charged in August with one count of sexual assault in connection with an alleged incident dating back to 1998.

This case, which is separate from his battle in Federal Court for his reinstatement, is due to return to a Quebec court on November 5.

The majority of respondents to a new pan-Canadian poll say they are concerned about the spread of COVID-19 in schools and want children and staff to wear masks.

The survey was conducted by the Canadian Center for Applied and Social Research at the University of Saskatchewan.

It indicates that residents of Quebec and the Prairie provinces were less likely than other regions to support masks in classrooms.

But, the survey indicates that those interviewed were largely confident in the safeguards put in place in their children’s schools.

The poll also found that support for more restrictions was tied to where people lived, and respondents in Ontario, Quebec and the Maritimes were more accepting of the rules in place.

What we are watching in the United States …

SAN FRANCISCO _ Pacific Gas & Electric began cutting power to about 25,000 customers in central and northern California on Monday and Southern California Edison warned it could do the same for up to 9,000 of its customers as high winds knocked down trees, downed power lines and started fires that forced people to flee their homes.

At least half a dozen small fires broke out statewide, challenging firefighters as they tried to contain the flames amid the high wind.

West of Santa Barbara, authorities ordered the mandatory evacuation of campsites, livestock and horse ranches near Refugio State Beach and closed US 101 _ the only highway along the coast _ as the winds pushed a fire that started in the Los Padres National Forest towards the beach, US Forest Service spokesman Andrew Madsen said.

The fire was propelled through a dense chaparral by winds blowing at 112 km / h. It had grown to at least 12 square kilometers by nightfall and was threatening possibly 100 homes, ranches and other buildings, authorities said.

About 200 firefighters were battling the flames and trying to protect homes and buildings, but the planes could not help as they were immobilized by the high winds, the firefighters said.

Forecasters have issued a red flag warning for extreme fire danger due to gusty winds. The warning extends until Tuesday evening. The strongest winds are expected most of Monday, said Hannah Chandler-Cooley, a meteorologist with the Sacramento National Weather Service.

The planned outages are necessary because high winds, combined with low humidity and drought-ravaged vegetation, could increase the risk of falling trees on power lines and trigger a rapidly spreading forest fire, PG&E said. in a press release. Heat waves and the historic drought associated with climate change have made wildfires more difficult to fight in California and the rest of the western United States.

What we watch in the rest of the world …

SEOUL, South Korea _ North Korean leader Kim Jong Un reviewed a rare display of weapon systems and vowed to build an “invincible” army, accusing the United States of creating tensions and not take steps to prove they have no hostile intent towards the North, state media reported on Tuesday.

In a seemingly continuous effort to drive a wedge between Washington and Seoul, Kim also said his drive to strengthen his army was not aimed at South Korea and that there shouldn’t be another war between Koreans against each other. others.

Kim delivered the speech on Monday at the “Self-Defense-2021” Defense Development Exhibition, an event to mark the 76th anniversary of the ruling Workers’ Party the day before. showcased an array of new weapons, including intercontinental ballistic missiles that North Korea has already tested or displayed in a military parade.

Calling the United States the “source” of instability on the Korean Peninsula, Kim said his country’s most important goal is to possess an “unstoppable military capability” that no one can dare to challenge.

Kim has accused South Korea of â€‹â€‹hypocrisy for calling North Korea’s weapons development provocative while spending heavily to increase its own military capabilities, including purchasing advanced US stealth fighters. But he always said his army was not targeting South Korea.

The Seoul Defense Ministry said South Korean and US intelligence authorities were analyzing the North Korean weapons on display but did not give details. Seoul’s Unification Ministry said Monday’s exhibition was the first of its kind since Kim took power in 2011.

The Supreme Court of Canada has unanimously upheld the country’s rape protection law, further strengthening a woman’s right to keep her sexual history out of sexual assault cases.

LOS ANGELES _ A senior Netflix executive has said Dave Chappelle’s “The Closer” special does not cross “the hate line” and will remain on the streaming service despite the fallout from the comedian’s remarks on the transgender community.

In an internal memo, co-CEO Ted Sarandos told managers “some talent” may join with third parties to demand the show’s removal, adding “what we’re not going to do.”

But the company responded to reports it had suspended three employees, including one, Terra Field, who criticized Chappelle’s special in the tweets. Field identifies on Twitter as a senior software engineer at Netflix and as a trans.

â€œIt is absolutely wrong to say that we have suspended employees for tweeting about this show. Our employees are encouraged not to openly agree and we support their right to do so, â€Netflix said in a statement.

According to a person familiar with the matter, the three employees joined a quarterly meeting of directors and vice-presidents of the company without obtaining permission. The person, who was not authorized to publicly discuss the situation, said a worker was suspended following an investigation.

What if an action was or could be taken against the other two workers was unknown.

In a statement released Monday, media watch group GLAAD said “anti-LGBTQ content” violates Netflix’s policy of rejecting programs that incite hatred or violence. GLAAD called on Netflix executives to “listen to LGBTQ employees, industry leaders and the public and commit to their own standards.”

Upon releasing the Chappelle special last week, the group said that “the comedian’s mark has become synonymous with ridiculing trans people and other marginalized communities.”

Ruth Hamilton was sound asleep last week when she was awakened by the barking of her dog, the sound of a crashing through her ceiling and the feel of debris on her face.

The Golden, British Columbia resident said she jumped out of bed and turned on the light to figure out what had happened and discovered a hole in her ceiling.

“I have never been so scared in my life,” she said of the October 3 incident. â€œI wasn’t sure what to do so I called 911 and while I was talking with the operator I turned my pillow over and saw that a stone had slipped between two pillows. “

A police officer was immediately dispatched to investigate, she said. Initially, the officer suspected it was debris from a construction site on a nearby freeway.

“He called the (construction site) and they said they didn’t do an explosion but saw an explosion in the sky and, at that point, we realized it was was a meteorite. “

They concluded that it must have been a fragment of a meteor shower that took place earlier that night.

“I was in shock and sat here for a few hours shaking,” she said. “The chances of this happening are so low that I’m quite grateful to be alive.”

In addition to being upset, Hamilton said she had avoided any injury, but planned to keep the rock. She said the insurance company inspected the damage and was now focusing on repairs.

This report by The Canadian Press was first published on October 12, 2021.

Sexy Beasts Season 2 review and when is Season 3 coming to Netflix?