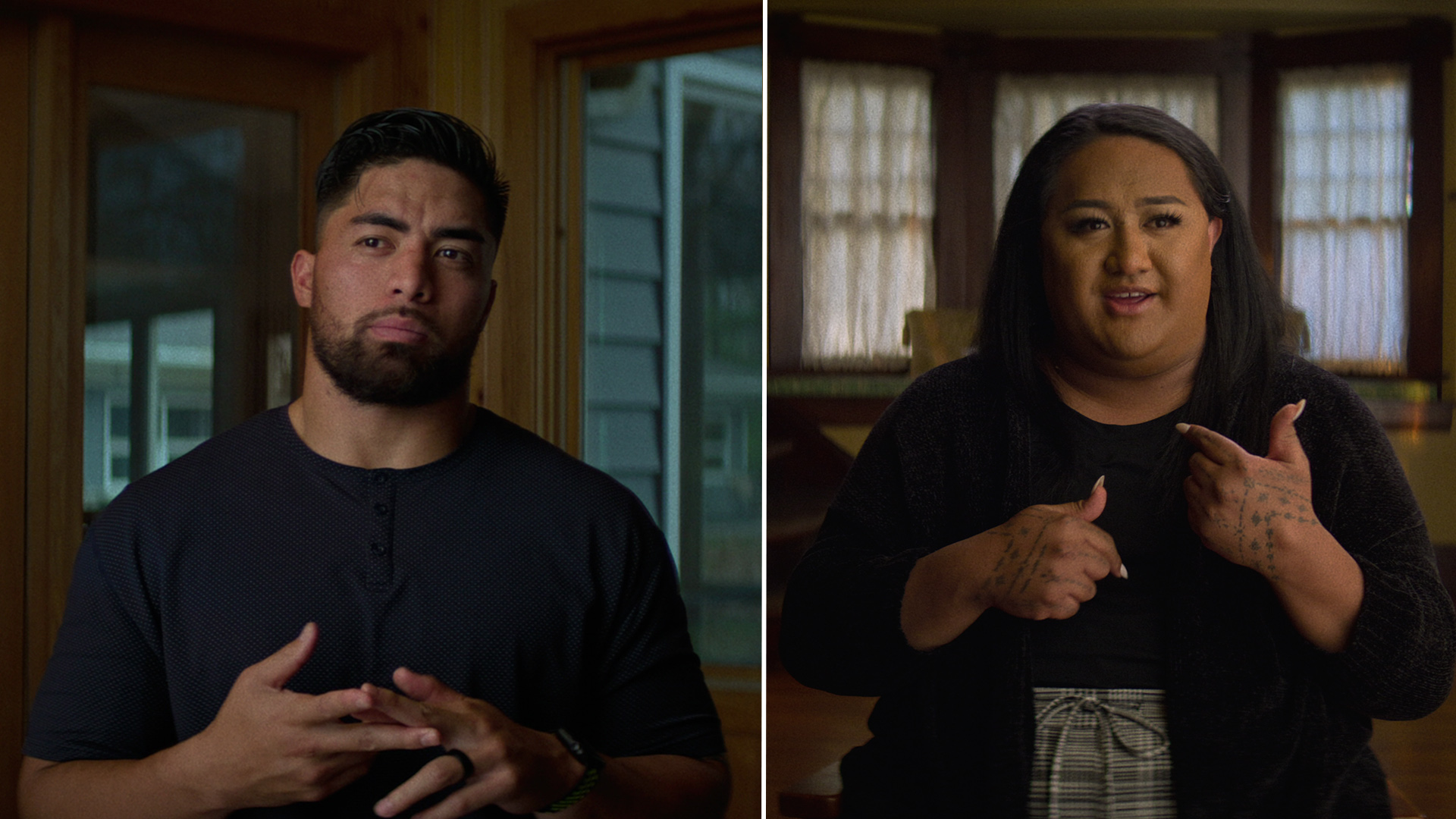 Ten years ago, Manti Te’o was an inspirational sports story representing all that is good about college athletics. Born and raised in Hawaii to a loving family and raised in the Mormon faith, Te’o became a superstar linebacker at Notre Dame on a level that earned him comparisons to the title character of Rudy. A heartbreaking turn of events early in his senior season (in which he was a Heisman Trophy runner-up) only added to his mythos in that classic sense of “overcoming adversity.” Te’o’s grandmother and girlfriend died the same day, yet Te’o overcame the pain to lead the Fighting Irish to an undefeated regular season and the national title game.

But the wellness story turned sour in early 2013 when Deadspin broke the news that Te’o’s girlfriend not only wasn’t dead but never existed. The person Te’o thought he was dating, “Lennay Kekua”, was an online fabrication. Te’o had never met Kekua in person, but befriended her online – through social media, text messages and phone calls – and eventually started dating her. But she wasn’t real. “Lennay” was a fake online persona created by a man named Ronaiah Tuiasosopo (who now identifies as a transgender woman). Te’o had been sin.

The whole ordeal is a tabloid-ready, made-for-TV saga, which is why the new Netflix documentary about it-part of the Unspeakable series – is “can’t turn away” compelling. But as I watched the bizarre narrative unfold—mouth wide open at times, appalled and amazed—the part that jumped out at me was unexpected. More than his thoughts on sports stardom, hype, or the dangers of online dating, Untold: The Girlfriend Who Didn’t Existreinforced for me a theory I had about contemporary culture: transgender and social media are inextricably linked, and the plausibility of trans identities is a unique by-product of the digital age.

‘Trans’ as a technological artifact

The connection clicked when I watched Tuiasosopo – a burly Samoan former soccer star, now dressed as a woman with false fingernails and false eyelashes – talk about how he (now “she”) started using the tools of the Internet to create fake online personas who have developed and nurtured all-digital relationships. Speaking of Lennay Kekua, which he had created by pulling images from another woman on Facebook, Tuiasosopo described the fake persona as an expression of himself: “It was a lot of who I really am. It was me with a different name tag, different photo. But for everything else, it was 100% me.

Only in a digital world like ours, where we increasingly live and interact in virtual spaces, can we make statements like this – that an online avatar, built from images of the body of a different person, but unrelated to our own embodied reality, maybe “100% me”. It’s no surprise that Tuiasosopo’s transgender journey began with an online identity experiment.

Most of today’s young adults have grown up in a world where they are best known by how they “present” themselves online. They take it for granted that a certain distance between their real self and their online self is normal. In some ways, the many possibilities of a digital self have become more compelling than the boring old embodied self in all its limitations. After all, our digitally constructed selves are the ones that can rack up vast global followings, rack up likes, and be cropped, airbrushed, or otherwise manipulated to hide flaws and imperfections. For teens in particular, struggling with difficult bodily development, embracing a disembodied identity online can feel like a reprieve.

This is further amplified by the shift in young adult social relationships from close and embodied (talking at the lunch table in the cafeteria, going to the movies together) to distant and disembodied (texting or DMing from home rather than going out ). For those who have lived their whole lives in the age of smartphones, it is antiquated to think of identity as something meaningfully determined by biology, family, geographic location, or other physical realities. Rather, it’s something of unlimited malleable potential – as fluid, ephemeral and remixable as an Instagram story.

Plausibility structures of avatar identity on the Internet are the same as those of transgender. Either way, “Who am I?” is a matter defined in expressive individualistic terms and based on psychological feeling rather than physical fact. The self is a idea who do not need to be connected (or “confined by”) bodily realities.

However Unspeakable does not make Tuiasosopo’s transgender identity a focal point, it is an important part of the story in that it vividly reflects a society increasingly disconnected from tangible reality.

Reality bent to our wishes

At some point in Unspeakable, Tuiasosopo tries to explain why he perpetuated the Kekua hoax, despite how it could ruin other lives: “That’s what made me happy. It was what I sought be the reality.

It is a statement capturing the zeitgeist. It encapsulates a decadent society less driven by respect for others than by the personal quest for happiness and defined less by what is real than by what a multitude of (often conflicting) perspectives are. wanna be real.

Tuiasosopo’s actions in the film are perhaps the most egregious example of defying reality in favor of a feel-good fantasy, but it’s not the only one. Te’o himself bears some of the blame. If he had asked Kekua more questions, stopped to examine the holes in his story, or, I don’t know, prioritized meeting him in person, maybe he would have discovered the scheme earlier. But he was caught up in a fantasy that pleased him and served him. And we become blind to facts when we are intoxicated by fantasies.

This is also true of the mainstream media, whose coverage of Te’o and his girlfriend was disturbingly sloppy, as illustrated by the Deadspin article which cites examples from everyone in the world. New York Times to the Associated Press reporting “facts” about Kekua that were blatantly untrue.

But we live in a world that moves too fast for fact-checking and values ​​retweets more than the truth. The mainstream media are indicted: they have been almost universally duped, perpetuating for months a feel-good story that any fact-checking office could have quickly debunked. It is no wonder that trust in the news media fell to historic lows. Now the “prestige” media have fallen for hoaxes when serving a narrative (remember Jussie Smollet?) enough times not to be surprised. It’s not what’s real that often drives news stories today. This is what wins clicks and ratings.

We live in a world that moves too fast for fact-checking and values ​​retweets more than the truth.

The media’s increasingly loose connection to reality parallels the separation of “identity” from physical reality exemplified by transgender. Both are artifacts of a post-truth era in which digital distortion and virtual malleability – deepfakes, metaverse avatars, stealth editing, puppets socks, fintasand much more, make “reality” something that bends to our whims and preferences rather than a fixed thing that imposes itself on us in unchosen and often inconvenient ways.

Yet we belittle, reject, or distort reality at our peril. The lesson from the story of Manti Te’o’s fake girlfriend is that fantasy may seem appealing in the short term, but reality always wins out in the end. No matter how much you want something real to be different than it is – whether it’s your body sex or your online girlfriend’s offline self – it’s always best to accept the the truth rather than putting it on my truth. Reality on God’s terms is so much better than fantasy on ours.

Reality on God’s terms is so much better than fantasy on ours.

In this increasingly surreal world, reality is cursed, Christians must protest against what amounts to epistemological injustice. Reality is marginalized and needs a lawyer. All of us should seek, celebrate and embrace the gift of objective reality. People suffer when reality is pushed aside, like Unspeakable makes painfully clear. Young people are slaughtered because the reality of biological sex is rejected.