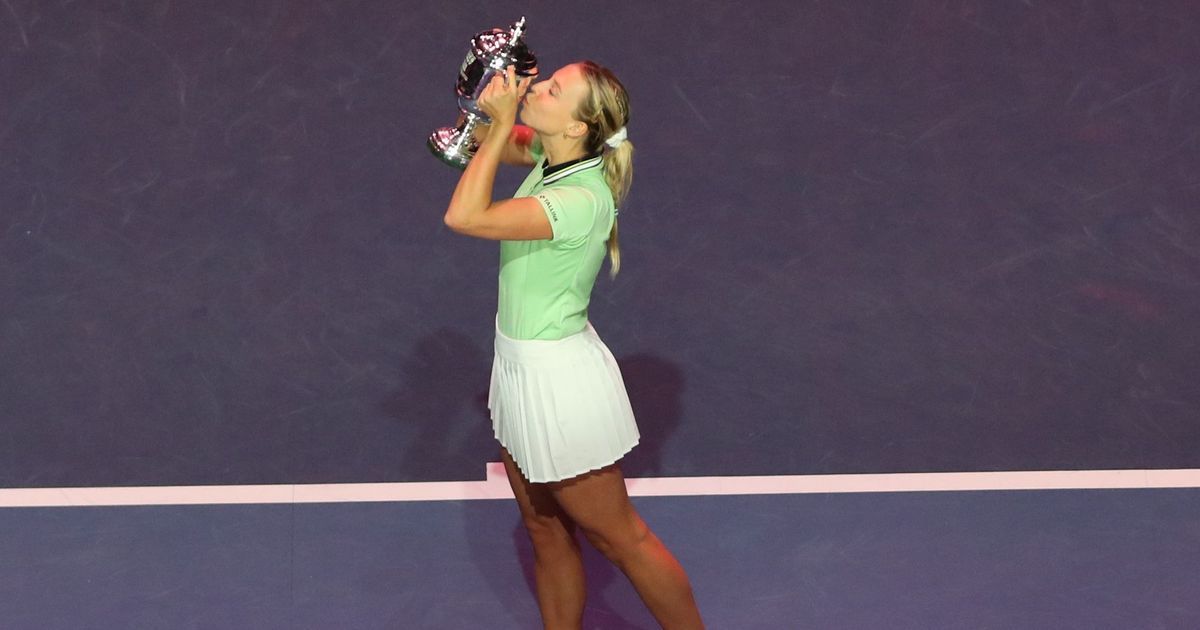 In a deadly battle between the top 10 players, 9th-placed Kontaveit needed 2 hours and 57 minutes to defeat 7th-placed Sakkari. Kontaveit lost a break in the second and third sets before claiming his sixth career WTA singles title – including five in the past seven months.

Inner dominance: Kontaveit’s 20-fight indoor winning streak began last year with title runs in Ostrava, Moscow and Cluj-Napoca, a rich streak of form that propelled her into the Top 10 and a place in the final. of the Akron WTA season, where she finished as runner-up to Garbine Muguruza.

With yet another indoor title under her belt after this week’s exploits, she becomes only the sixth player with at least 20 consecutive indoor wins since 1989. The others are:

Kontaveit is the first player to reach that number in over a decade. Justine Henin was the last to do so, when she won 22 indoor matches in a row between Stuttgart 2007 and Stuttgart 2010.

Stats Corner: Kontaveit and Sakkari entered their final clash with a heavy but balanced rivalry. The pair had faced each other 12 times before, picking up six wins apiece.

However, Kontaveit had won his two most recent battles, beating Sakkari in the Ostrava final and in the round robin in the Akron WTA final last year.

Kontaveit have won three in a row and now find themselves ahead 7-6 in their heads-up. It is also the 19th Top 10 win of Kontaveit’s career.

Sakkari nearly ended a title drought that dates back to his first WTA singles title, won on the clay courts of Rabat in 2019, two years and nine months ago.

However, the Greek was denied a second title by an inspired Kontaveit, just as she had played her only other final since 2019, in the aforementioned Ostrava last year.

Breakdown of matches: Very little separated the pair, with both breaking serve four times and having nearly equal efficiency returning both first and second serves.

Kontaveit led 5-2 in the first set, but she failed to serve the set at 5-3, and Sakkari claimed two consecutive breaks of serve to lead 6-5. Sakkari then served the set, dismissing the winners on both wings to score a fifth game in a row.

Sakkari extended that streak to seven straight as they advanced 2-0 in the second set, although Kontaveit pulled serve at 3-3. After Kontaveit saved two break points to hold it 6-5, the Estonian grabbed a set point in the next game, but Sakkari swept it away and the pair moved on to a tie-break.

In the breaker, a pair of unrecoverable serves from Kontaveit gave him a 6-3 lead and three more set points, and the No. 2 seed converted the second of that trio after a backhand from Sakkari had found the net.

Sakkari regrouped at the start of the third set, earning a break for 2-0 and fending off three break points to extend her lead to 4-1. Sakkari served for the game at 5-3, but her backhand let her down in that game with errors as Kontaveit pulled serve again.

Kontaveit embraced his new opportunity with enthusiasm, firing a forehand winner to earn a second break in a row and lead 6-5. Kontaveit wouldn’t back down from there as it was his turn to win five straight and win the final set, keeping his indoor winning streak active.

Kalinskaya and McNally clinch the doubles title: Earlier on Sunday, the St. Petersburg Women’s Trophy doubles championship was decided with Anna Kalinskaya of Russia and Caty McNally of the United States beating Alicja Rosolska of Poland and Erin Routliffe of New Zealand 6-3, 6-7 ( 5), [10-4].

Rosolska and Routliffe contested a nearly hour-long second set to push the final into a decisive tiebreaker, but Kalinskaya and McNally won the first five points of the match-tiebreak and came home from there in 1 hour and 39- minute deal.

Kalinskaya and McNally teamed up for the first time this week and won the title by winning their semi-final as well as the final in a match-tiebreak.

Block, delete, review: A tongue-in-cheek guide to navigating dating in 2022