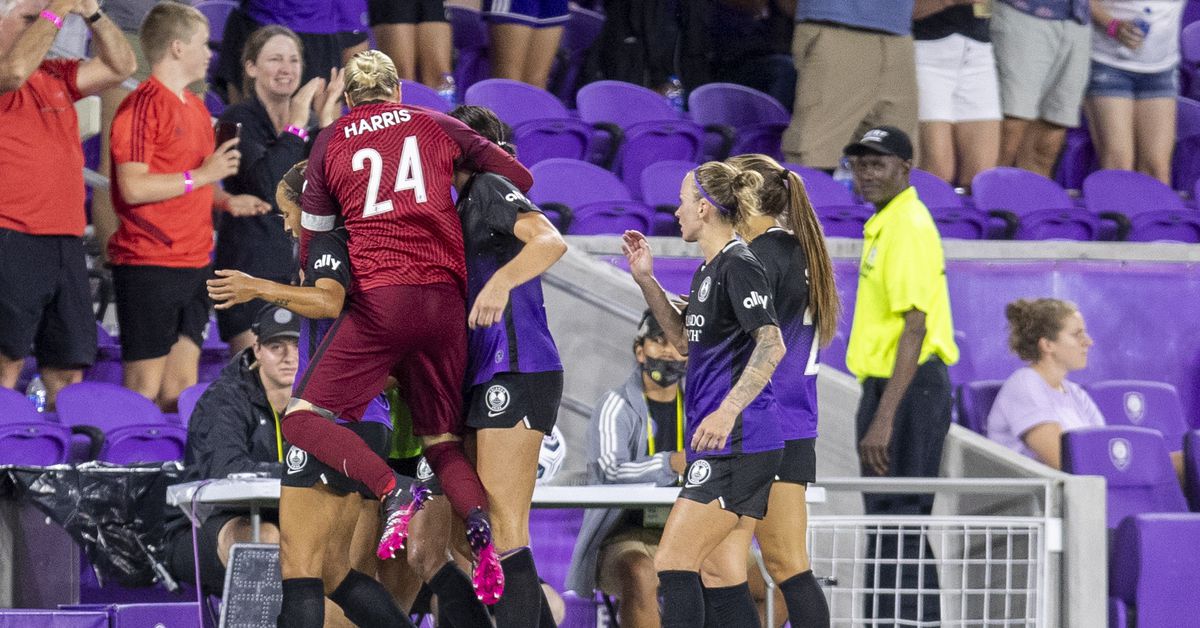 Welcome to your game feed as the Orlando Pride (4-2-4, 16 points) heads west to face the Portland Thorns (5-3-1, 16 points). It’s a Sunday night battle between two of the top three teams in the NWSL. This is the second of three scheduled meetings against Portland this season, with the Thorns returning to Exploria Stadium on August 14.

Pride have always struggled against the Thorns, going 2-9-1 since 2016. However, Pride won the first meeting between the two teams this season in May.

Alex Morgan opened the scoring in the 22nd minute. Taylor Kornieck sent the striker over and Morgan scored a magnificent goal at the far post. But just before half-time, Simone Charley entered the box, meeting a cross from Natalia Kuikka for the equalizer. However, just 17 seconds into the second half, Sydney Leroux took advantage of a Kelli Hubly playing error, scoring the decisive goal as Pride held on for the 2-1 victory.

In 2019, Pride lost all three games to the Thorns by a combined score of 9-4. In the season opener, Ashlyn Harris was excellent with six saves, but Caitlin Foord and Tobin Heath each scored a goal and assisted in a 2-0 result.

Less than a month later, Toni Pressley opened the scoring from a Pride corner. The Thorns responded with three unanswered goals, taking the victory 3-1. The last game was on July 14, 2019. The Thorns took the lead after just three minutes and then took a 3-0 lead. Pride fired back valiantly, equalizing on Erin Greening’s goal in the 90th minute. However, Tyler Lussi was left open in injury time for the late winner as the Thorns won 4-3.

In 2018, the two teams met in the third game of the season. Chioma Ubogagu gave Pride the lead in Portland, but the Thorns fought back eight minutes later with an equalizer from Lindsey Horan. Christine Sinclair scored the game-winning goal 11 minutes later as the Thorns won 2-1.

On May 12, 2018, Pride defeated the Thorns for the first time. Morgan started the scoring in the 11th minute and Christine Nairn doubled the lead in the 21st minute. The Thorns pulled one out in the 23rd minute thanks to Sinclair, but it wasn’t enough as Pride won 2-1.

The last game between the two teams this season went to Portland. Horan and Hayley Raso recorded the score as the Thorns won 2-0.

The two teams started the 2017 season against each other in Orlando. Nadia Nadim and Sinclair led the visitors to a 2-0 victory. The second meeting didn’t take place until the end of September and saw Pride secure their first point against the West Coast team in a goalless draw. Two weeks later, they met again in the first and only Pride playoff game. The Thorns scored twice in the first 20 minutes before Alanna Kennedy pulled one out in the 23rd minute. However, two late goals from Raso and Sinclair took the Thorns to the 4-1 victory.

The Pride kicked off their inaugural season in Portland on April 17, 2016. Steph Catley gave the expansion squad a surprising 12-minute lead. Dagny Brynjarsdottir equalized in the 25th minute and Horan won it in the 82nd. Later in the year, Pride hosted the Thorns for the first time. Jasmyne Spencer opened the scoring in the 67th minute, but Portland scored twice in the final 11 minutes, coming home with a 2-1 victory.

Pride got off to a good start in 2021, going undefeated in its first seven games. With the Olympians starting one by one, Pride have lost points in their last three consecutive games. It started with a 2-1 loss to Houston and continued on July 4 with a 2-0 loss to North Carolina.

It looked like Pride would lose its third straight game last weekend against Racing Louisville. Fortunately for the home side, Leroux scored a late tying goal as Pride drew 1-1.

The Thorns enter this game after winning points in five of their last six games, dating back to their game in Orlando. After winning three out of four wins, the Thorns ended in a goalless draw against Gotham FC last week.

The main story of this game will be the absence of the players. Ali Riley left Pride to join New Zealand ahead of the next Olympics, which means all Pride Olympians are now gone. Morgan (United States), Marta (Brazil) and Erin McLeod (Canada) are the other three players absent.

The Thorns will be missed even more than the Pride during the Olympics, as Crystal Dunn, Adrianna Franch, Horan and Becky Sauerbrunn are with the USWNT and Sinclair is with Canada.

Despite the missing players, Portland has a strong squad and plays their home games in front of the biggest crowds in the NWSL.

“Phenomenal threats,” Pride head coach Marc Skinner said of tonight’s opponent. “They have so much quality and they play a little differently when they’re in front of their home fans. You have to be very disciplined when you are far from the ball and then, when you get it, you have to express yourself like them.

“We feel really good. It had been a long time since we had been to Portland. It is a beautiful place. It’s a real football challenge because they have a big fan base there like we do here. We are really looking forward to going because we are a different team than the one we first approached. [May 26] Game. I think there is excitement, there is verve, there is energy. We want to go out there and show who we are now.

In addition to the Olympians, the Pride will be without Jade Moore (knee) and Carrie Lawrence (ankle). Additionally, Phoebe McClernon and Marisa Viggiano are listed as questionable with foot injuries.

Portland will only miss Tyler Lussi, who suffers from a left hip injury.