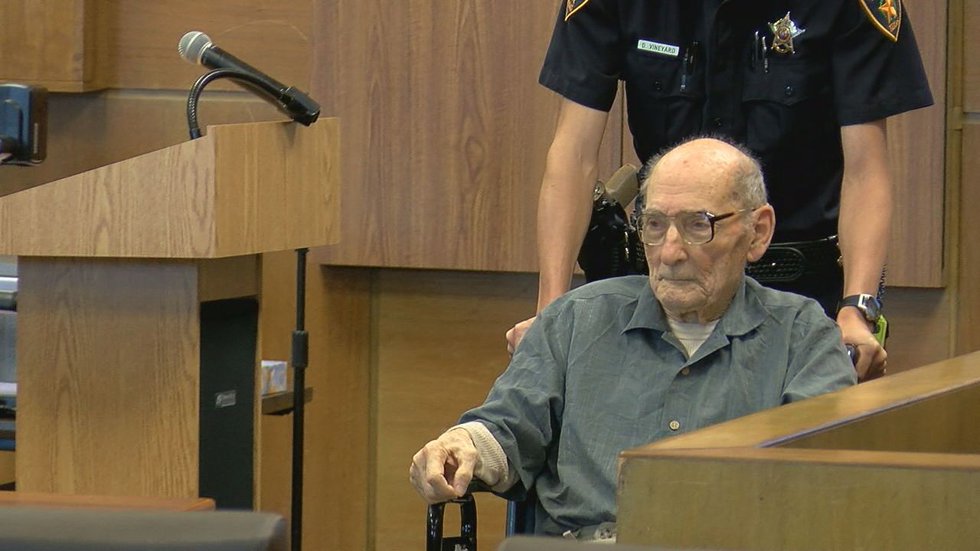 TYLER, Texas (KLTV) — The punishment phase of a 91-year-old man’s arson trial began Wednesday morning in a Smith County courtroom. The jury must hear evidence before deciding on a sentence.

After more than two hours of deliberation on Tuesday, a jury found Kermit Gabel guilty of arson. Gabel was charged with burning down a structure at 205 S. Beckham Ave. in Tyler on November 6, 2020. He was arrested nearly a week later on November 11 for first-degree arson. He was 89 at the time of his arrest. Gabel pleaded not guilty to the arson charge in court on Tuesday.

Court began Wednesday morning without the jury and Gabel asking the judge to read something he had written. The judge indicated that this statement should go through his lawyer.

Two earlier crimes were to be discussed by prosecutors on Wednesday. Gabel’s attorney had said he intended to plead “not true” to those crimes, which he did once the jury was called.

The sentence for Gabel is 5 to 99 years to life in prison. If the state can prove both prior crimes, the range would be 25 years to 99 years or life.

“I am penalized because I exercised my right to a jury trial,” Gabel told the court.

“Nobody is punishing you for being judged,” Judge Austin Reeve Jackson said.

The jury was then called for opening statements, in which a prosecutor referred to Gabel’s criminal history and called him a “career criminal”. An assistant district attorney said Tuesday’s arson conviction was Gabel’s 10th felony conviction since 1956.

Prosecutors first called an investigator to the witness box for testimony. Documents dealing with Gabel’s criminal history were later entered into evidence and shown to the jury.

A document showed a Dallas County home burglary from 1980. He was sentenced to life on July 8, 1980. Gabel had previously been convicted of fraud and burglary in Ohio.

Another document was later shown from Illinois in which Gabel was convicted of three counts of residential burglary in 1993. He was sentenced to 20 years on each of the three counts plus a three-year sentence.

Mugshots were also shown of Gabel, one in which he used an alias. Documents presented to the jury indicated that Gabel had used several pseudonyms.

Documents presented to the jury also indicated Gabel was convicted of aggravated burglary in Ohio in 1981. He was also sentenced in Ohio to 10 years for burglary and theft in 2008.

An additional misdemeanor conviction in Smith County from 2020 was also mooted.

Gabel’s date of birth has been the focus of scrutiny in court. His attorney claims he is a WWII veteran born in 1925, making him a 96-year-old. The date of birth on court documents and arrest reports dating back decades indicate that he was born on December 31, 1930. That would make Gabel 91 years old.

After a brief morning break, the state closed its case in the punishment phase. Gabel’s defense attorney then asked to approach the bench.

Following a conversation with prosecutors from the bench, the jury was excused. Gabel was then driven to the court office with his lawyer. The court office has already been used for the conversation between Gabel and his attorney, as he is hard of hearing,

After lunch, the state and defense closed their arguments.

Jackson then offered the jury his instructions for deliberation. The range of penalties for arson is five to 99 years or life and a fine, if applicable, of up to $10,000.

Although the state presented two of Gabel’s previous burglary convictions in Ohio and Dallas County, Texas, Gabel pleaded “false” to those previous felony convictions. If the jury were to find that the two previous convictions are true, the sentence would be 25 years to 99 years or life.

Prosecutors are asking the jury to sentence Gabel to life in prison.

“There’s nothing else going to stop him,” one of the assistant district attorneys said.

In his closing arguments, Gabel’s defense attorney said it had been years since he had argued over how long a prison term a client should be given.

He told the jury that in all his years of practicing law, the state had never asked for less time when the option of life was available.

In their rebuttal, an assistant district attorney called Gabel’s crime a “serious matter.” He argued that Gabel’s age shouldn’t make a difference.

“How many chances has Kermit Gabel had in his 90 plus years,” an assistant prosecutor asked.

The jury returned its verdict after more than two hours of deliberation. The jury will return Wednesday morning to hear testimony from his punishment.