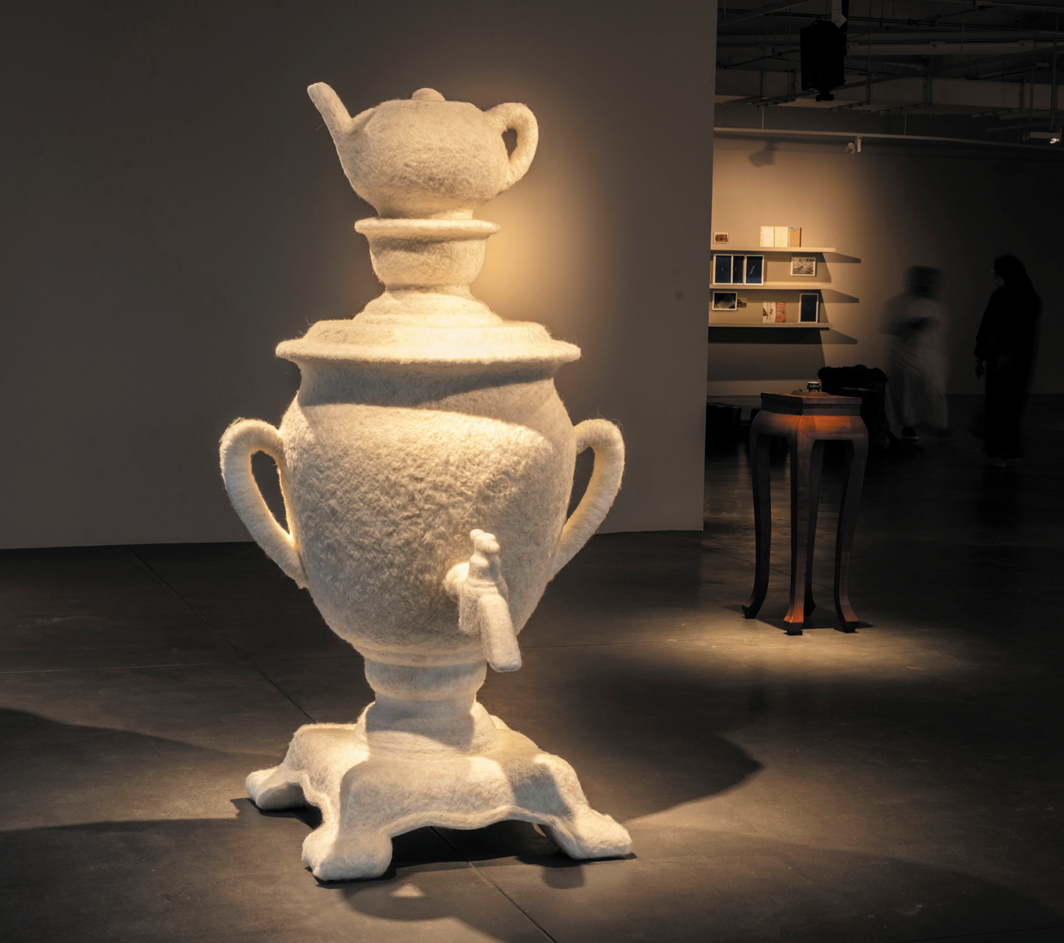 “Clip: what’s on your plate?” the inaugural offering at the new Hayy Jameel Art Center in Jeddah, was a rigorous and generous spectacle; spending time with him was like taking a spoon from an avocado to scoop up the richer green layer next to the skin. The show went beyond the question in its subtitle, asking not just what’s out there, but how she got there. Curated by Rahul Gudipudi of Jameel and Dani Burrows of the Delfina Foundation, the exhibit explored the foodways of Saudi Arabia and beyond, with a focus on the rich cosmopolitanism of the port city of Jeddah resulting from centuries of pilgrimage to nearby Mecca. The first of the two galleries was dominated by the installation of Bricklab and Misht Studio Missing dinner2021. Veil-like muslin strips, screen-printed with natural vegetable dyes, suspended on a curved pedestal that held colored resin casts of a Jawi (Indonesian) meal to trace the culinary heritage of trade and migration between Indonesia and the Hejaz region dating back to the 10th century.

Nearby, Fatima Uzdenova presented five sumptuous sculptural and sound works featuring material traces of pilgrims from the former Russian empire. A royal blue textile piece, gathered like an oyster mushroom and studded with a single pearl pin, hinted at the special hajj passport which, until 2009, authorized entry into the Kingdom of Saudi Arabia. A pair of small filigree and mother-of-pearl earrings painted with scenes from the Kaaba and Al-Aqsa Mosque hung in a small velvet box set into the wall. On a beautifully carved wooden table, a bowl of salty yogurt drink Ayran sitting in front of an oversized felted Karachai wool samovar, as eminently cuddly as a giant teddy bear or someone’s grandmother, and indeed these works are dedicated to the matriarchs of Uzdenova’s family.

The extractive colonial and working-class policies that underpin modern agriculture were also at the center of the show. A collection of burnished chocolate sculptures, mostly heads, from the Cercle d’Art des Travailleurs de Plantation Congolaise, in Lusanga, Democratic Republic of Congo, was particularly compelling. Founded by plantation workers with artists, the collective reinvests profits generated from the sale of artworks into buying back land to create environmentally sound worker-owned post-plantations. The title of the book, Africa Empty Europe Full2021, testifies to the connection between plantation capitalism and the wealth of the Global North.

This connection was made explicit in Annalee Davis’ 2014 ‘Wild Plant Series’, consisting of beautiful soft latex paintings of plants rendered in watery browns on sugar cane plantation receipts that have yellowed with age. age, some of which have burn marks in the same place. . Displayed in a beautiful wooden display case, they charted the biodiversity of Barbados’ post-plantation landscape while reminding us of the various horrors, human and botanical, wrought by monocultures. In Sancintya Mohini Simpson’s alternate miniatures of female indentured laborers on South African sugarcane plantations, the landscape has been stripped down to leave only women, sowing and harvesting in empty space. Her approach highlights the gendered dimensions of agricultural work, as well as the asymmetrical access to finance and support that women face. Between these two series was the rusty corrugated iron shed housing the elegiac video installation of Mohini Simpson_ Kūlī nām dharāyā_ / They gave you the name ‘Coolie’2020, with its soundtrack – a Bhojpuri folk song with South African Tamil lyrics – spilling across the room.

A revolving program of shorts included Jonathas de Andrade’s achingly tender portrayal of Brazilian fishermen Oh peace (The Fish), 2016, and an excerpt from the film by Zina Saro-Wiwa Table Manners: Season 2, 2019, which shows people in the southern region of Oguniland eating. Here, a woman methodically works her way through a skewer of roasted snails, their charred exteriors reminiscent of scorched crops and tar-choked earth. She breaks eye contact only to take sips of Maltina. We are what we eat, of course, but what we eat says even more about who and why we are.