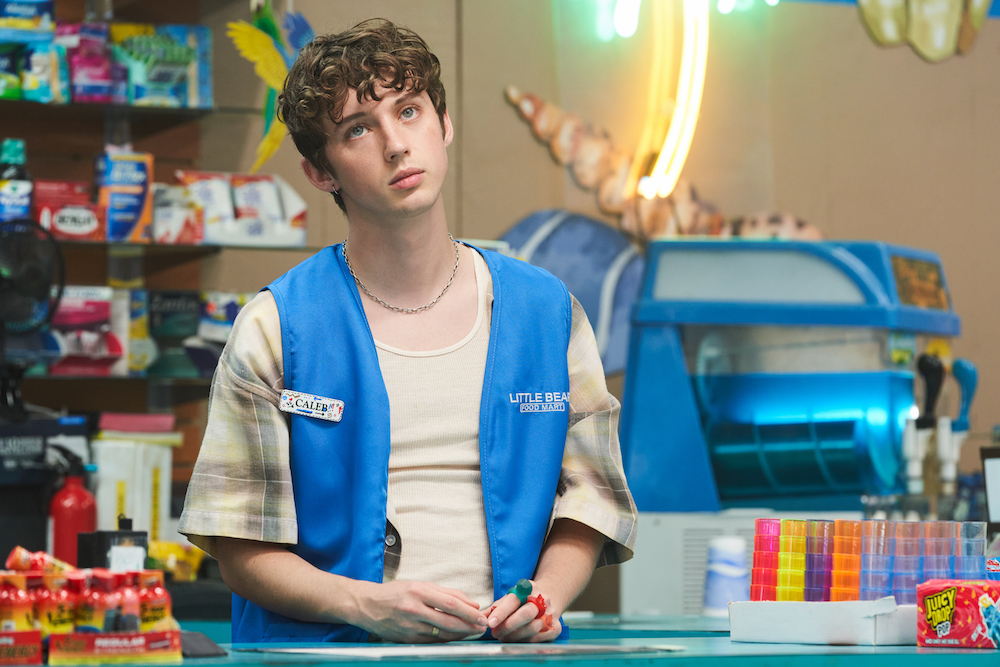 Fittingly, “Three Months” is a movie about waiting, and while 12 weeks might seem like an eternity for its openly gay lead character, Caleb (Australian pop star Troye Sivan), it’s nothing compared to the decades that he has others have spent waiting for a project like this to come. Here, readily available to anyone with a Paramount Plus subscription, is a candid and assertive portrait of a contemporary queer teenager. Writer-director Jared Frieder’s feature debut feels like the LGBT equivalent of “Juno”: snappy and refreshingly nonjudgmental to deal with the aftermath of a risky one-night stand.

In 2011, when the film is set, it takes three months for an antibody test to conclusively determine whether someone who might have been exposed to HIV was in fact infected. It’s a simple rule of the road for sexually active gay people, but rarely discussed in popular culture. It can hardly be underestimated how important it is for contemporary teenagers, bombarded as they are by pornography and peer pressure, to also be informed about the consequences of casual sex – not in an alarmist or moralistic way, mind you, but just to have a movie that depicts what they go through, if and when they end up in Caleb’s shoes. (His shoes, it must be said, are one of the film’s most endearing details: classic white canvas Chucks, covered from heel to toe in random, sometimes steamy doodles.)

With his porcelain features and pre-Raphaelite curls, Sivan serves as the perfect stand-in for an insecure gay teenager. He doesn’t seem as neurotic or anxious as Frieder wanted Caleb to be, and yet the singer (who also starred in the gay conversion drama “Boy Erased”) manages to suggest that the character’s sarcasm is kind of self-defense. strategy. Fresh out of high school, Caleb took advantage of a dreamy (off-camera) encounter with an out-of-town stranger, only to realize after the condom broke that his partner was HIV-positive. Now he faces a summer of agonizing uncertainty.

Patience is not Caleb’s strong point. This is evident in the opening scene, when, biking home through Hollywood, Florida, he has a little tantrum when he is forced to stop so the local drawbridge can accommodate a passing ship. . This vignette reveals a thing or two about Caleb’s personality, much like the fat purple tandem bike he inherited from his dad.

Obviously, independence isn’t Caleb’s forte either. He goes through life looking for a boyfriend or someone else to “complete” him, as half the film is spent navigating his way to find out if Estha (Viveik Kalra), the cute Indian child from his support group, could be “the one.” This means that almost all the time Caleb is dealing with the possibility that he is HIV-positive, he is chastely dating someone who is going through the same thing. Yet, as corny as it sounds, Caleb’s journey of introspection and self-discovery is ultimately designed to teach this insecure young man to stop worrying about appealing to others and learn to to like.

This is perhaps the most valuable lesson that can be offered to any teenager, gay or otherwise, although Frieder errs on the side of exaggerating all feel-good messages. (Spoiler alert: Skip to the next paragraph until you’ve seen “Three Months.”) It’s frustrating that a movie in which someone is constantly obsessed with their HIV status ultimately decides not to disclose the results to the public. Frieder’s message is clear: it doesn’t matter, since Caleb realizes he’s adorable anyway. But that’s not sincere, given the world we live in, and a more interesting personal journey could have started with a positive diagnosis.

Fortunately for Caleb, he is surrounded by people who accept him unconditionally. Not his parents: his father died years earlier, and his Orthodox Jewish mother (Amy Landecker) is largely irrelevant. Caleb now lives with his grandmother (Ellen Burstyn, whose star status lends punch to a minor role) and her supernaturally supportive husband (Louis Gossett Jr.). Her lesbian best friend Dara (Brianne Tju) has her back through the whole ordeal, even when Caleb nearly forgets about her to focus on his newfound crush.

Caleb and Estha’s romance should appeal to those who haven’t seen many gay parades on screen, and the cross-cultural aspect gives it an added dimension of interest. (There’s no shortage of charming gay rom-coms, though it’s still rare to come across them on a platform like Paramount Plus.) reviews classic episodes of “The Real World,” in which Pedro Zamora enters the story by sharing her HIV diagnosis. This MTV series helped de-stigmatize AIDS for an entire generation, and “Three Months” wants to have the same impact on young audiences, giving them a positive point of reference in a world still reluctant to discuss such things openly.