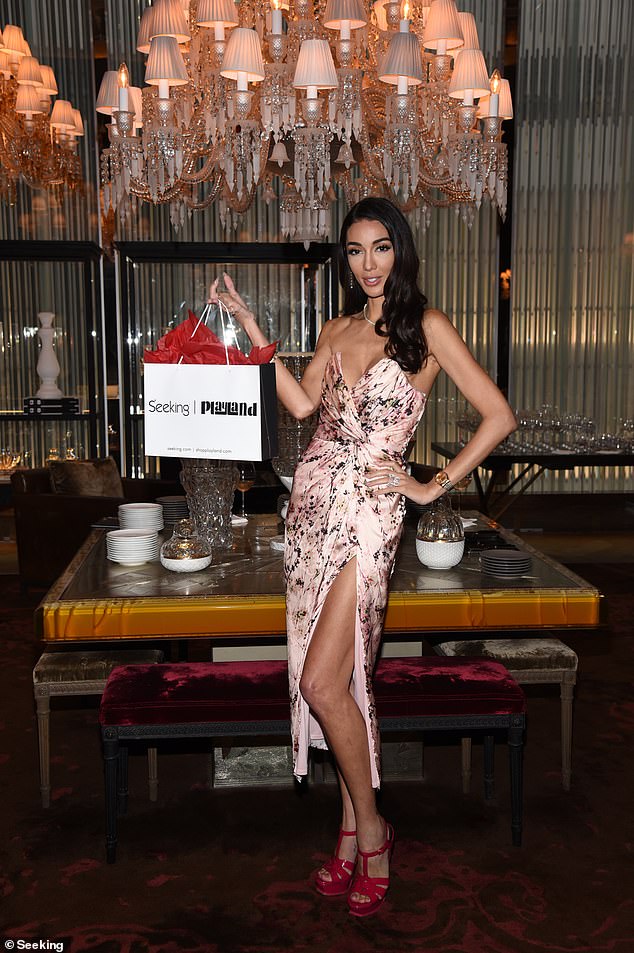 Real Housewives of Orange County star Noella Bergener has revealed she’s back in the market and is back on the “sugar dating” website Seeking, where she’s now the new ambassador.

Earlier this year, the 36-year-old confirmed she was dating new boyfriend Bobby Schubenski after her messy divorce from husband James Bergener, with whom she shares a two-year-old son.

But the reality TV star announced on Thursday that she is single again and is now an active member of Seeking.comformerly known as SeekingArrangement, where she met her former spouse.

Noella raised some eyebrows and was accused of being a ‘gold digger’ by critics and even her own co-stars in April when she made the bombshell reveal on air during the RHOC reunion on Bravo with host Andy Cohen.

Ex: Noella, 36, drew judgment from her co-stars at the RHOC reunion in April, after revealing she had met her ex-husband ‘Sweet James’ Bergener (pictured) on the website

However, it seems the mother-of-two is ignoring the haters thanks to her new partnership with the dating site which will also involve her new range of sex toys.

Previously, Seeking, which was founded in 2006, was known as an online platform where attractive young women – or “sugar babies” – could meet typically older, wealthy men – or “sugar daddies”. who could offer them financial assistance within the framework of a transactional relationship.

The website has since been rebranded as a dating website where “attractive, successful people improve their lifestyles through open and honest relationships”.

As the brand’s newest rep and returning user, Noella told DailyMail.com that she encourages single men and women to “dating”.

“You can’t compare Seeking to a regular dating site because it’s not. Seeking is a chance to empower yourself and find what you’re actually looking for instead of going on another date disaster,” she said.

The Real Housewife revealed her ‘first instinct’ was to return to the website after she felt it was time to be ‘proactive and serious’ about dating after being dumped by her ex-husband in last July.

“I’m not the type of girl to go to a bar or ask my orthodontist to set me up,” she told DailyMail.com.

“It’s embarrassing not to be in control of the situation. With Seeking, I find that I’m able to really empower myself to decide who I want.

Noella revealed she was first introduced to the platform seven years ago after giving birth to her daughter from a previous relationship in 2015.

“I hadn’t had sex for 18 months. I gave birth. I was breastfeeding. I was busy, you know? she says.

Online meeting: Noella told Bravo host Andy Cohen and her co-stars that she and James dated for five years and were married for one after meeting on SeekingArrangement

Together Again: The Season 16 Reunion featured the cast of The Real Housewives Of Orange County and host Andy Cohen

Then: Previously, Seeking, which was founded in 2006, was known as an online platform where attractive young women – or “sugar babies” – could meet typically older, wealthy men – or “sugar babies”. daddies” who could offer them financial assistance services in the context of a transactional relationship

“I got to the point where I wasn’t going to go to a bar and meet someone. I wanted something where there’s a chance for a future – at least a connection.’

Noella said she later learned that a close friend of hers had met her husband on Seeking and – having no prior experience with any dating app – offered to create an account for her.

‘She created my first profile and she contacted six different people and my (ex-)husband was one of them.

“So now knowing that, how I got really lucky that first time without even trying. Imagine what will happen when I actually try,” she laughed.

As for her critics and haters, Noella said she believes the criticism she received was hypocrisy that stemmed from outdated dating culture norms.

“Let’s say a woman is proud to say she went on a blind date, that’s pretty much what online dating is these days.

‘I have enough courage to go [online] instead of asking my friend to set me up with a rich doctor. It just feels like there’s a bit of pot-call-the-kettle-black going on there.

Rebranding: The website has since evolved into a dating platform where “attractive, successful people improve their lifestyles through open and honest relationships.”

Proud: Speaking at the launch of her partnership, Noella told DailyMail.com she was proud to represent the dating site and encouraged singles to ‘update’.

Noella’s partnership with Seeking also means her new sex toy store, Playland, will be available exclusively to members of the dating site.

“Maybe I’m just a new generation, but hopefully by being radically honest it will encourage some of these primitive, proper types, clutching their beads, to maybe just drop those damn beads and put them somewhere else. .’

Noella also revealed that while she got some backlash for being admitted to the show’s reunion, she also received a slew of messages from other Seeking users who praised her for her bravery and dedication. honesty.

“Most of the messages I got after it came out at the reunion were from people telling me they had fallen in love with Seeking, or met their husband or wife, or had the most amazing relationship of their adult lives because of Seeking.

“They were aware of it but were also secretive about it. It was a silent DM saying “please don’t tell anyone.”

She continued, “So this is my walk. My approach is to live in my authentic truth and try to be as responsible as possible.

“It’s not everyone’s journey, but hopefully we can get to that place where there’s less judgment and less stigma, about people doing the hard work to be honest.”

Noella drew critical remarks from co-stars at the first meeting of the Real Housewives of Orange County reunion.

Maternal love: Noella and James, 50, share two-year-old son James Jr. and she is also mother to seven-year-old daughter Coco from a previous relationship pictured on November 25

Noella explained that the couple dated for five years and were married for one before going their separate ways during the pandemic.

“Anyone out there said I cared about the money or panning for gold,” she said at the time.

“You have to worry about the money,” said host Andy Cohen. “You met him (James Bergener) on a website that talks about attractive women meeting rich men.”

“It wasn’t on my mind when I wanted to start a family and love this man,” Noella replied.

Noella’s partnership with Seeking also means that her new sex toy store, Playland, will be available exclusively to members of the dating site, and she hopes to de-stigmatize sexual expression as “a proud bi-sexual, bi-racial woman.” “.

A guide to the changing world of gender-neutral sex toys