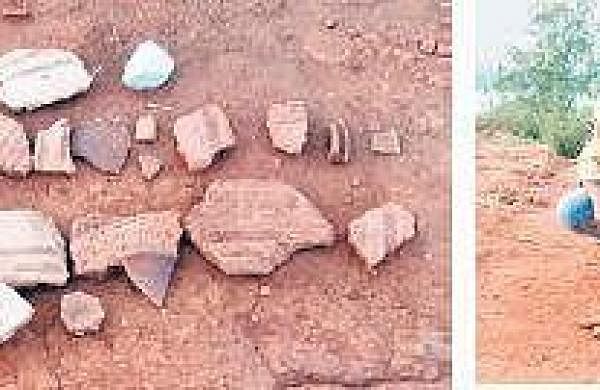 HYDERABAD: History and archeology researchers from Potti Sriramulu Telugu University and Heritage Telangana have discovered an ancient historical site dating back to the Satavahana era in Telukunta village of Peddapalli district. The team led by Dr MA Srinivasan, an assistant professor at the University, found two layers of brick walls, pottery and tiles from the Satavahana period during surface exploration on Tuesday.

Dr Srinivasan told Express that the mound, locally called “Sammakka Saaralamma Gutta”, could uncover more brick structures and materials that could be dated between the 1st century BC and the 1st century AD, if proper excavations were carried out.

The mound measuring approximately 130 meters in diameter, is located next to a huge reservoir which may have been the source of water for the habitation on the mound. At the base of the mound, 200 acres of cultivated land appears to have been the habitation site based on the researchers’ surface survey.

“Two layers of brick wall were unearthed during the exploration, constructed by huge bricks of the Satavahana period, measuring 52 x 26 x 8 cm in dimensions. Two layers of walls seemed to run in parallel, which could reveal the existence of an anapsidal stupa on the mound,” Dr Srinivasan said.

At the base of the mound, a layer of brick wall was also visible. Besides the brick structures, a large number of tiles were found scattered on the surface of the mound. Telukunta is located just 5 km from another important historical site called Dhulikatta, where there is a Satavahana fort and a Buddhist stupa.

In the 1980s, the late Thakur Rajaram Singh first identified Telukunta as an ancient historic site. Former Director of State Archeology Department Dr. VV Krishna Sastry had mentioned Telukunta at Dongathurthi hill range as a site of iron smelting in 1st century BC. In the 1980s, a coin of the Vishnukundi dynasty was also found in this village.