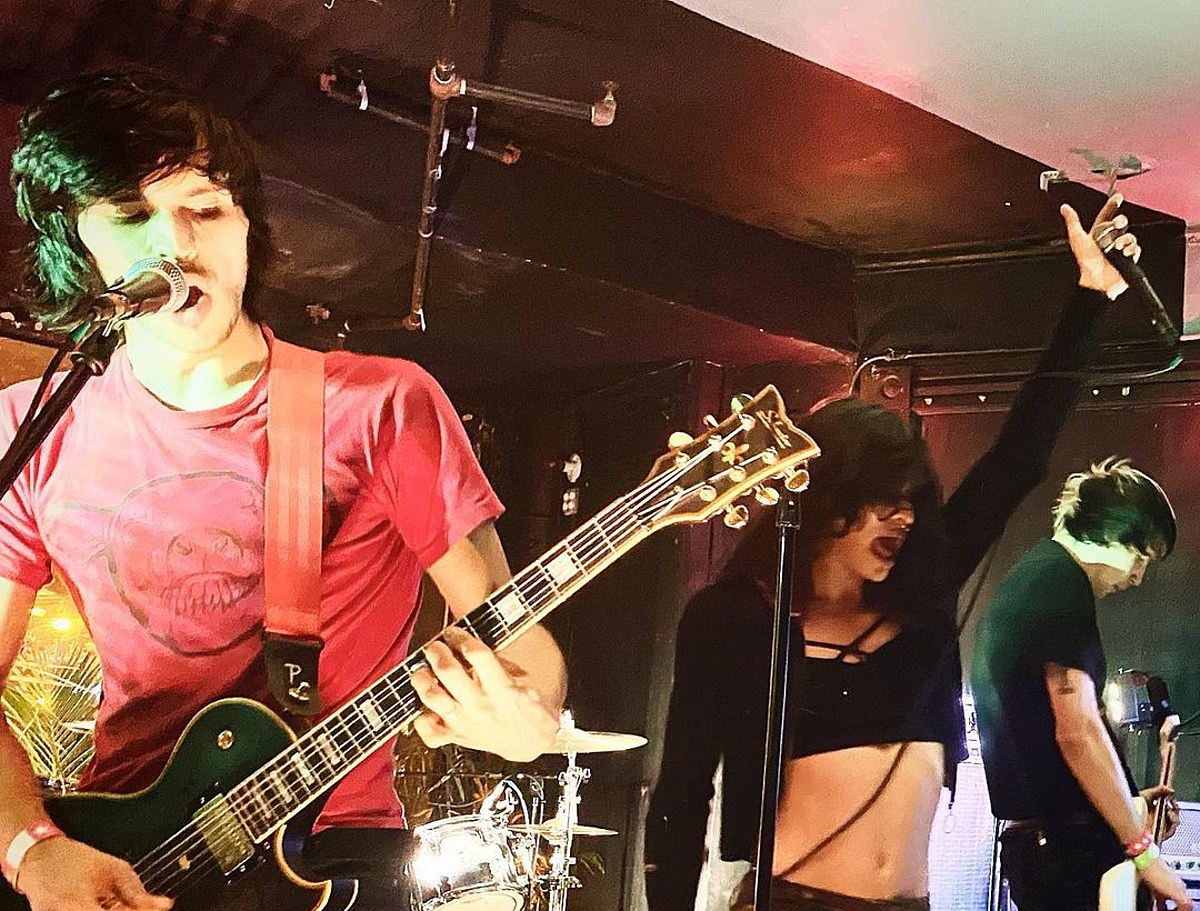 The SeeYouSpaceCowboy / Greyhaven / Vatican / Wristmeetrazor The tour drove through New York City last night (11/21) for a show at Brooklyn’s Market Hotel, and it was a killer show from start to finish. All the bands exist somewhere under the metalcore umbrella and go well together, but this was an especially good tour as there weren’t two bands on Bill that sounded the same. Each had their own spin on the genre, and the musical diversity of the lineup (and the narrowness of all the bands) made the show feel like it was gone.

Things started with Wrist razor, who already seem ready for manner crowds and larger stages. The group – especially singer Justin Fornof – have the theatrical Gothic look of a T and they do it in a really convincing way. Looks like they came out of a hot topic in 2004, and yet, it never seems pastiche. Justin not only looked the part, he was a bossy leader as well, and the rest of the group was as tight as they could get. The lead riffs cut through the mix like knives, and the puffed tips hit you like a punch in the guts. Wristmeetrazor supported their excellent new album Replica of a strange love (Prosthetic Records), and they played pretty much all of the great moments of that, plus some older stuff as well, and the show only made a record stronger. It also showed how much chemistry WMR has. Justin is the undisputed leader, but the group has three singers who all scream and sing, and you can tell how tight-knit they were by the way they seamlessly swapped lines.

Then there was Vatican, who just signed to UNFD and released a two-song single, and they’ve got a lot more of a meat-and-potato metalcore vibe – straight up, powerful, straight and straight up. With a thick, crisp rhythm section, each note sounded like a blunt attack, and vocalist Mike Sugars had the vicious bark necessary to compete with the rest of the band’s thunder. And while the Vatican is largely all about brute force, they’ve mixed things up a bit, incorporating some of the electronic samples that they also use in the studio. Those aerial interludes only made the rest of the set even harder.

If the whole Vatican was the most antagonistic, then GreyhavenIt was the most welcoming and accessible – which doesn’t mean they didn’t eat their ass too much. They set themselves somewhere in the realm of Glassjaw, Thrice and Every Time I Die, with bursts of metalcore that rivaled any of the other bands on the poster, but with a melodic alternative rock vibe far more than the rest. . They played their new single “All Candy” from their upcoming album produced by Will Putney This bright and beautiful world, until April 15 via Equal Vision (pre-order on limited yellow vinyl), which is their most melodic song yet, but they also played another unreleased song from the record that started out with a Converge-y kind of vibe, so This bright and beautiful world presumably has more surprises in store. Otherwise, they stuck with the material from their 2018 debut LP. Empty black, and they played these songs like a well-oiled machine.

ultimately See you later, space cowboy were up, and while it was a great tour that drove fans crazy since the first group started, it was clear who the headliners were. As soon as they got into their first song, people rushed onto the stage to get as close as possible to Connie Sgarbossa, and she was quickly surrounded by a sea of â€‹â€‹people who reached out to her and screamed. in all worlds. She returned it right away, and even though she opened the show by saying she was exhausted from being halfway through the tour, you never would have guessed. His energy level remained at 110% throughout the set. The same was true of the rest of the group, particularly Connie’s brother Ethan (guitar, backing vocals) and clear bassist / vocalist Taylor Allen, both of whom rocked their instruments and rocked their bodies with athletic performance and n ‘have never missed a single beat. Ethan and guitarist Timmy Moreno had a two-guitar locked attack that delivered a patchwork of panic chords, machine gun breaths, searing leads, clear arpeggios, punchy melodies and screaming dissonances without ever shattering. press snapshots. The group’s multi-person vocal approach was equally inventive, with back and forth screams from Connie and Ethan and satisfying, sung hooks from Taylor that always kept you on your toes. (And I didn’t have the best view, but I’m pretty sure new drummer AJ Tartol, who was a total powerhouse, also started screaming.) The ensemble was absolutely crazy both on stage and outside, and the crowd really didn’t want it to end. SYSC had turned off their amps and started to leave the stage when the audience asked for one more song, and the band did an encore which I’m pretty sure wasn’t actually planned, and they went. in one way or another even more nuts for what they already had.

SeeYouSpaceCowboy’s new album The novel of affliction is now available on Pure Noise, and you can get it in limited numbers clear / green / yellow vinyl, exclusively in our stores. We also have Greyhaven’s upcoming album on limited yellow vinyl.

Find SYSC on tour next year with Senses Fail. To learn more, read our interviews with SYSC (here) and Wristmeetrazor (here). Some fan videos below …