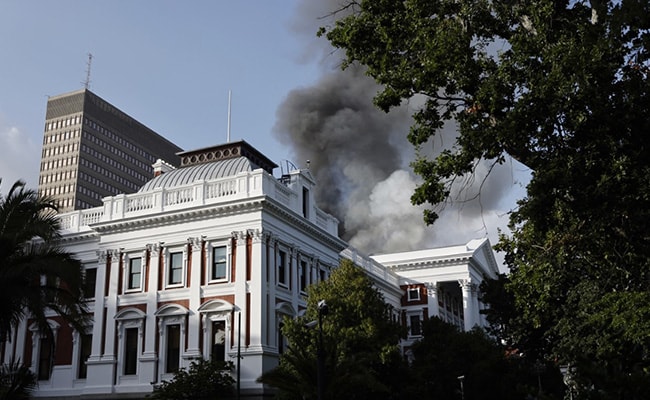 Firefighters resumed their fight on Monday against a blaze that engulfed South Africa’s parliament and threatened national treasures, as police confirmed they accused a 49-year-old of starting hell.

Firefighters said the blaze, after breaking out at around 5:00 a.m. (03:00 GMT) on Sunday, was under control after a fight that continued into the night.

But in the late afternoon, spokesman Jermaine Carelse said the fire had resumed in part of the Cape Town complex – the roof of the building housing the National Assembly.

Only a dozen firefighters were still deployed out of the roughly 70 who had fought to control the blaze, and around 30 reinforcements were dispatched using a lifting crane to direct their lance.

No casualties have been reported, but the damage is catastrophic.

The blaze started in the older, wood-paneled part of the building, a section that houses South Africa’s first parliament and some of the country’s most valuable artifacts.

It then spread to the new neighboring assembly, where lawmakers currently meet.

Parliament spokesman Moloto Mothapo said the roof of the National Assembly had collapsed.

“The whole room where the members sit … has burned down.”

President Cyril Ramaphosa told reporters at the scene on Sunday that a man had been detained and the building’s sprinkler systems had apparently failed.

The Hawks’ elite police unit said a 49-year-old man would appear in court on Tuesday charged with “burglary, arson” and damage to state property.

The presidents of the parliament were to meet the Minister of Public Works Patricia de Lille to take stock of the devastation.

Jean-Pierre Smith, a member of Cape Town’s town hall safety and security committee, said the entire complex suffered damage, both from the fire and from the tons of water used to fight it.

As for the roof of the historic part of the building, “let’s go,” he said.

Completed in 1884, the historic section is where the Parliament preserves treasures, including around 4,000 heritages and works of art, some dating back to the 17th century.

The collection includes rare books and the original copy of the old Afrikaans national anthem “Die Stem van Suid-Afrika” (The Voice of South Africa), which was already damaged.

It also features a Keiskamma tapestry, measuring 120 meters (390 feet) in length, named after a river in the southeast of the country, which traces the history of South Africa from the earliest indigenous peoples, the San , until the historic democratic elections of 1994.

â€œThe temperature inside is always around 100 degrees Celsius (over 200 degrees Fahrenheit), making it difficult to fully determine the true extent of the damage,â€ Smith said.

– Second fire in one year –

About 70 firefighters were deployed on Sunday, some using a crane to spray water on the blaze.

The area was quickly secured, with a cordon extending to a plaza where flowers were still on display outside nearby St. George’s Cathedral, where the funeral of anti-apartheid icon, the Archbishop, took place on Saturday. Desmond Tutu.

Cape Town has been home to the South African Houses of Parliament since 1910, when separate administrations formed a union under British rule and became a predecessor of the modern South African Republic.

The site includes the National Assembly and the upper house of the National Council of Provinces, while the government is based in Pretoria.

It was in parliament that South Africa’s last apartheid-era president, FW de Klerk, announced in 1990 his intention to dismantle the white minority regime.

The complex consists of three sections, with the most recent additions built in the 1920s and 1980s.

In March, another fire also broke out in the old wings of parliament, but it was quickly brought under control.

Cape Town suffered another major fire in April, when a fire on the famous Table Mountain overlooking the city spread, devastating part of the University of Cape Town library which houses a unique collection of African archives.

(Except for the title, this story was not edited by NDTV staff and is posted from a syndicated feed.)