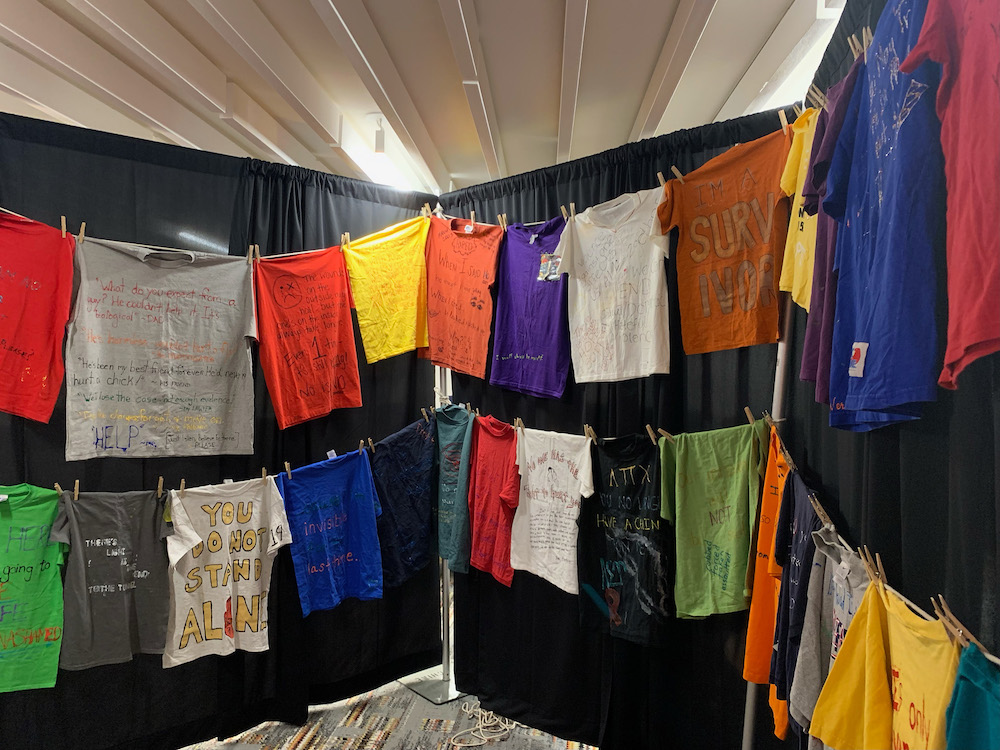 The Clothesline Project raises awareness of sexual and relationship violence

To support student journalism and the content you love, become a member of the Daily Orange today.

A navy blue t-shirt reads “You don’t stay alone” in capital letters on the ground floor of the Schine Student Center. Along with sketches of Rosie the Riveter and quotes about pain and anger, this shirt is part of the latest exhibit for The Clothesline Project.

The Clothesline Project is a national initiative that aims to raise awareness about the prevalence and impact of sexual and relationship violence, said Kyra Birenbaum, peer educator at the Barnes Center. Survivors create a t-shirt as part of their healing process, which is then displayed for other survivors as messages of strength and to facilitate dialogue for those affected by abuse.

“Engaging in the stories of survivors who are brave enough to display their raw emotions, thoughts, and experiences is incredibly important,” Birenbaum said.

Each individual shirt color denotes some form of trauma, Birenbaum said. For example, a yellow shirt represents a survivor of physical assault or domestic violence while purple represents someone who survived an attack because of their sexual orientation.

The display is confined within a black curtain, with a trigger warning message outside, alerting viewers that the exhibit contains sensitive material.

Some of the shirt messages talked about specific instances of trauma, such as “I know you’ll never stop, so I’m just gonna fly away and be free in your words and actions.”

Others focused on the healing process. One t-shirt read, “Your past is just a reminder of your strength and courage, your potential and your purpose,” and another read, “I’m a survivor…I didn’t give up.” … I succeeded! Speak ! Fight against violence.

Survivors, Survivor Reps, and general supporters came together to decorate many of the project’s shirts at Sigma Psi Zeta’s philanthropy event.

“Students should participate to let others know that they have a support system on this campus and that there are people and resources willing to listen and help,” said Chelsea Kang, President of Philanthropy at Sigma. Psi Zeta.

Kang said the sorority’s philanthropic mission is to fight violence against women. They therefore decided to collaborate with the Barnes Center and its events for get-togethers and domestic violence awareness month. The Barnes Center set up the Project Clothesline exhibit in hopes that it will educate and raise awareness about sexual violence on the SU campus.

Birenbaum reiterated those goals and said it’s impossible to overemphasize the importance of events like these on campus in creating healing space for survivors.

“We need to give a platform and amplify the voices of victims, survivors and their loved ones who are too often silenced,” Birenbaum said. “By doing our part, we can help change the culture of rape that is so prevalent in our society and on our campus.”

Birenbaum emphasized the power this exhibit can have on survivors, allowing them to heal safely, as well as raising awareness in the campus community.

Viewers should give people space when watching the shirts and not draw attention to their reactions, Birenbaum said. The exhibit is meant to be a private experience that can be overwhelming, she said.

Abhishek Ramamurthy, a first-year graduate student, said that while it is difficult to hear from survivors of sexual trauma and domestic violence, it is very important to open up the conversation to raise awareness on campus.

Syracuse has been making a clothesline project display in various forms for over ten years. In the past, the exhibit has been shown in several locations, including the Panasci Salon at the Schine Center where the shirts were visibly hung on a clothesline, and not contained within a black curtain as they are this year.

This year’s current exhibition, with more than 30 shirts, will be in place from October 17 to 21 for students and visitors. Some students passing by the exhibit, such as sophomore Ana Acosta and junior Natalia Cardone, said they were happy to see an exhibit addressing this issue on campus.

“This posting is a really proactive form of talking about this issue,” Cardone said. “It’s so much better to see it in person than to see it on social media.”