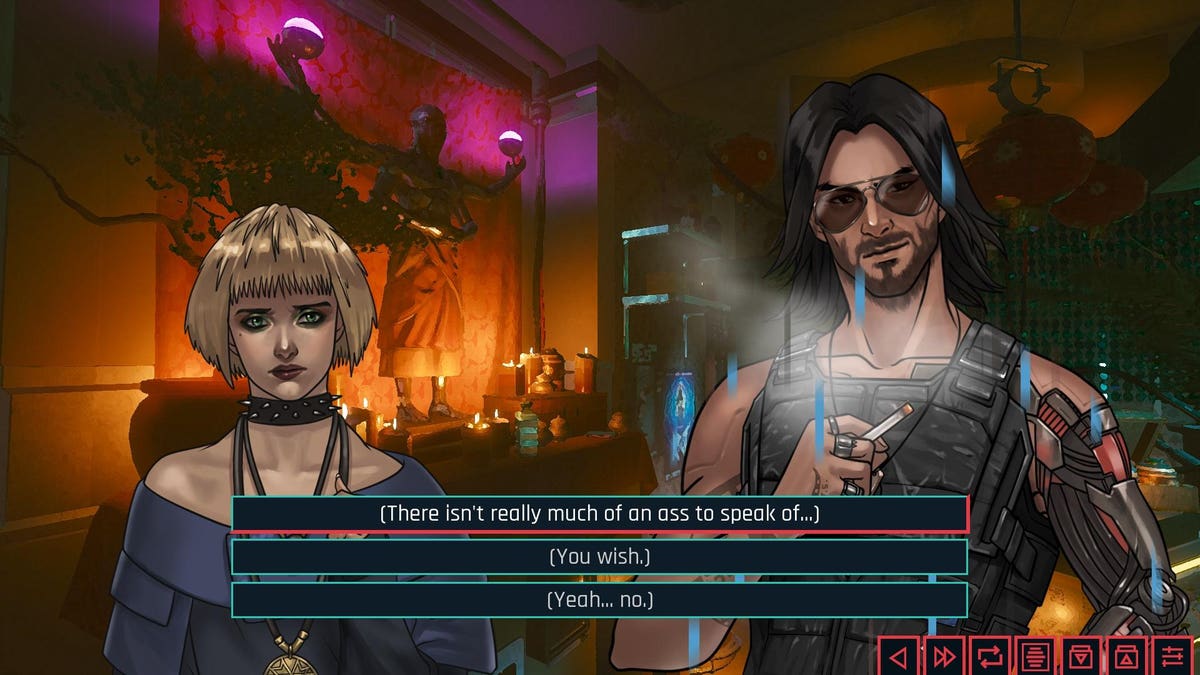 While we’re all waiting for Cyberpunk 2077 to release any information or updates for 2022, fans have once again taken up the task of producing new content, but this time not with in-game mods.

I’ve seen a few different CDPR employees tweeting about this project, a new fan-made game called Cyberbang 2069. It’s a visual novel set in the Cyberpunk 2077 universe that has both explicit SFW versions and NSFW as you try to romance various male members of the Cyberpunk 2077 universe. This first version focuses on trying to win the affection of Sandayu Oda, the ninja of Arasaka, although it is planned to include Goro Takemura, Johnny Silverhand and Victor Vektor, and demos for this content will be added later.

The game description reads “A FREE and UNOFFICIAL fan project made with the express permission of CD Projekt Red and not endorsed by it.” So they asked permission to make sure that CDPR doesn’t end up shutting them down. And again, the CDPR developers seem to really like this:

Yes, it’s a “sexy” production, but gamers are impressed with the artwork, writing, and care that goes into creating the game. A sample of some reviews:

“As a CP2077 fan, I really like what you’ve done. Love how you pay homage to the game, but still able to bring fan fiction to life. Well done, great artwork and storytelling solid, felt comfortable with the characters, instantly recognized each location. well done.”

“It’s so good. The quality of the VN is above the hills. At the moment there is only one full route available (Oda’s), but gosh…it’s is absolutely stunning. I haven’t tried anything this stunning in ages. Thank you for creating this masterpiece. Chef’s Kiss.

“I just played the Vik route and my heart melted and exploded at the same time. Sensations were at level 10. Great job with the game. I really appreciate you doing this. The official Cyberpunk 2077 game was awful with the romances they offered and this game is just needed.

Cyberpunk 2077 of course had its own set of explicit romances in the game itself, but they were quite limited and didn’t include any of the characters featured here, which was perhaps what inspired this game in the first place. In Cyberpunk, you are effectively limited to one true romance option per gender and sexual preference. Woman V can only romance River or Judy. Male V can only like Kerry or Panam. Cyberbang 2069 allows Male or Female V to have many more male romance options, and further fleshes out those characters and potential relationships.

Either way, I appreciate how dedicated the Cyberpunk 2077 fandom is, despite all the issues with the game over the past year. I think CDPR has created some great characters here, and it’s cool to see them being embraced by fans, and then in turn, CDPR calling out these fan projects themselves. Try the game if you want here.

Pick up my sci-fi novels Herokiller Series and The Earthborn Trilogy.